The same spirit that erected one of the Village of Morrin’s most prized landmarks nearly three decades ago is alive and strong as the Morrin Sod House is being rebuilt from the ground up.

The sod house was built in 1980 to celebrate the 75th birthday of Alberta, and has since remained a popular attraction, with tours regularly stopping at the site. It was constructed with traditional settler methods, using what was available.


While most of these makeshift prairie palaces only stood for a season or two, until a permanent home could be constructed, the Morrin Sod House has stood for about 29 years. Charlie Pierce, Member of the Sod House Society, and chairs the committee for reconstruction, said it was high time for the house to be rebuilt.


“We have all those artifacts in the House, and it didn’t seem right to see it fall,” he said.


The house was beginning to show its age, which prompted the society to strike a committee to look into reconstruction, and a great turnout came onboard with members of the community, and other organizations in the community.


The community has also chipped in financially for the project.  Pierce says the committee has applied for a grant for the project, they estimate will cost in the area of $16-20,000. The Morrin Ag Society, The Morrin Lions Club, the Blooming Prairies Seniors, The Village of Morrin and Mountainview Credit Union have all chipped in. Starland County is also helping the project along.


A great help to the project has been, and continues to be Clara Montgomery. She was instrumental in the original construction, and now the committee is relying much on her meticulous note taking and records to guide the project along.


This particularly dry spring threatened to pose a bit of a stumbling block for the project, as the committee was concerned about finding suitable sod that would be structurally sound. Pierce said they have tested some grass in the bases of dry sloughs that contained enough moisture for the project. Pierce says they have even located the original plow used to cut the sod for the original house, and have tested it, and it is in working order.


While the construction will remain very similar to the original, they are making efforts to make the new sod house more structurally sound. They have decided to place the house on concrete footings. While the original was reinforced with rebar, Pierce says the house will have a constructed steel frame. The original hut had a sod roof, but it quickly degraded and was soon replaced with a solid top. This time they will use shakes in the construction of the house.


While some of the original people who constructed the sod house about 30 years ago are not participating, Pierce says in some cases their children and families have become part of the project. They hope to complete the project this summer. 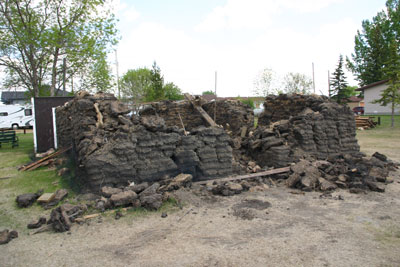