It looked like 1959 was to be a good year along the Miramichi Bay in New Brunswick for salmon fishermen. Those few words; 20 boats still missing, were heard along a party phone line held by a 24-year-old Mac Jones, brought with them tragedy.

A lone fisherman came in at the beginning of salmon season with a catch that hadn’t been seen in 100 years. Instantly the villages mobilized. Boys joined their fathers on their fishing boats to prey on the ocean’s offering, as they had done for generations. They set sail from Escuminac.
“Every boat, even some that weren’t sea worthy went out that afternoon,” said Jones. “All the kids came from school on Friday, and went out with their fathers and brothers and uncles and friends because the news of the 100 salmon has spread through the area.”
“This freak storm, called a nor’easter, came up and tossed the 25 foot boats around like match sticks.”
In the end, 35 men and boys perished in the storm.
Jones was only a month at his first parish of Harwick, having been ordained on May 24, 1959. His community was part of a series of fishing villages along Miramichi Bay. This fateful Saturday came to define Jones, and his service for the next 50 years.
Last Sunday, May 24, Jones celebrated 50 since his ordination with his congregation at St. Magloire’s Anglican Church. This event was much in contrast to the events of June 1959 when he saw his first community at its very worst time.
“That obviously impacted my work there in the parish,’” he said.
He spent the rest of the Saturday visiting families in his parish who had lost their loved ones at sea. In all 15 of the 35 lost at sea were Jones’s parishioners, ranging from age 13 to 64.
His time at the parish of Hardwick did not last  very long.
“This is why I was moved after 18 months, because I saw these people at heir rawest, torn wide open, and they needed a new priest to come and help them heal. And I needed the chance to heal, even though I don’t know it,” said Jones. “It influenced the way I did my job anywhere else; how I dealt with people. It is very hard to put into specific, but I learned to rely on God more than I had.”
The last funeral he presided over following the event was on August 17 of 1959.
On July 16 of that year, about a month after what became known as the Escuminac Disaster, the community received a gift that uplifted their spirits. On the day of the storm, Queeen Elizabeth II and Prince Philip arrived in Canada for a royal visit. Some vigorous lobbying by a local politician brought the royal couple to New Brunswick to meet the widows, children and some of the people involved in the rescue.
Mac recalls he and Father Paul Arsenault, the Catholic priest in the community introducing each person to the Queen. He could not hear what Elizabeth II said told the but he said for most it was an uplifting experience. He laughs he has been a monarchist ever since.
January of 1961 he as moved to Oromocto, a town that had been transformed from a sleepy village to a thriving community of 10,000 by the opening of CFB Gagetown. He then went to a suburb of St. John NB called Renforth until he left full time ministry in 1968.
From there he pursued a legal career. He worked work with Ontario Probation Service until 1970 when he entered Law School in Winnipeg. He graduated in 1973, and was called to the Ontario Bar in 1975. He practiced with a law firm in Port Hope, Ontario until January of 1982.
At that time Alberta was looking for crown prosecutors, and Jones wanted to do more court work than he was doing at he time, and decided to come west. He came to Drumheller and worked as a prosecutor.
All this time her remained active in the church. In 1985, he began as an assistant at St. Magloire’s. Twice between 1985 and 2003, he was priest in charge when there was no rector.
He never had trouble with his two careers.
“Both as a priest and as a lawyer you are dealing with people. They were complimentary in many ways,” he said.
He recalls being at a jury trial in Calgary on a Saturday, waiting for deliberations when he mentioned off hand to a Calgary Herald reporter he had to return for Sunday Service. It blossomed into story on the “Priest- prosecutor.”
Drumheller is now home, in fact it is longest he has lived in one place. He has become very involved in the community and particularly in the Drumheller Music Festival. He was even named Rotary Club’s Drumheller Citizen of the Year.
He and his congregation celebrated this anniversary with events that included a luncheon and a special fly over of the DCHS football field where parishioners spelled out “Thanks Mack, for the humble pastor to see from above. 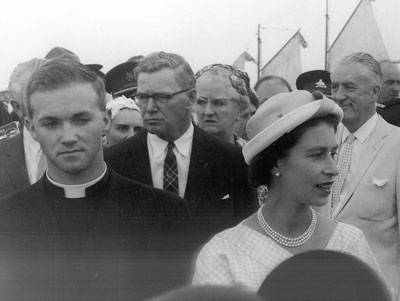