Town pays up for contraventions of Environmental Act | DrumhellerMail

The Town of Drumheller had to ante-up to the tune of $8,500 for three contraventions of the Environmental Protection and Enhancement Act for issues stemming from the operation of its water and wastewater plants.

Two of the violations come from the April 2007 boil water advisory. One of the contraventions was for the Town of Drumheller exceeding its turbidity limit for treated water.
The second was for not reporting immediately by telephone the elevated turbidity level. The third contravention was for exceeding the monthly average total suspended solids limit for wastewater discharged in February 2008.
“No one wants to be fined but with all things considered, we were in general agreement with the facts that were submitted. We felt the $8,500 was reasonable and after discussion with council, we chose not to appeal their (Alberta Environment’s) decision,” said Drumheller CAO Ray Romanetz.
Romanetz explains the events leading up to the April 2007 boil water advisory.
He says a number of factors contributed. The town was in the midst of commissioning the plant after making some changes, and it wasn’t “fine tuned.”  On top of that, the reservoirs were at a low level, and water from the river with very high colour had to be drawn upon. Because of these factors, the operators were not able to keep the turbidity below the required level.
Romanetz adds the staff did not believe they were not in compliance. They thought the maximum turbidity was 5 NTU (nephelometric turbidity unit) when the limit was 1 NTU.
“We were in contravention, and as a result of that, we were to notify Alberta Environment, and we didn’t. The procedures we have in place are very clear in terms of providing direction as to what has to happen, and that it has to happen on a very timely basis,” said Romanetz.
Since the incident, the town commissioned a report, and has acted on the recommendations.
“The key component was implementing an emergency response plan because the key consideration was if we don’t comply with our approval, we must immediately notify Alberta Environment. It is those kind of things that are being stressed,” said Romanetz.
Other changes to the plant to improve quality include reservoir operation improvements and the installation of UV equipment at the water treatment plant.
The penalties came after 22 months of examination. Members of the town’s staff met with Alberta Environment for an ‘opportunity to be heard meeting,’ giving the town the ability to provide all the information needed to make an informed decision.
With respect to the third contravention at the wastewater treatment plant, Infrastructure Services director Al Kendrick stated, “there are a number of things that are being done to make management of the incoming wastewater at the plant more efficient. The major step is the $15 million rebuilding of the waste water treatment plant.”
Construction of the plant began last month and will increase the capacity and the treatment efficiency of the plant.
Carrie Sancartier, public affairs officer for Alberta Environment, confirms the Town of Drumheller has been operating the Water Treatment Plant and Wastewater Treatment plant in total compliance with the Environment Protection and Enhancement Act since the infractions occurred. 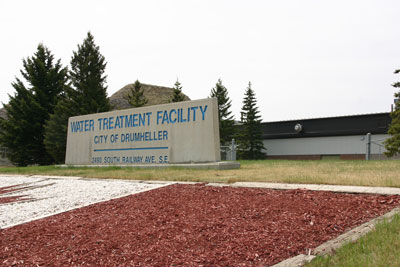