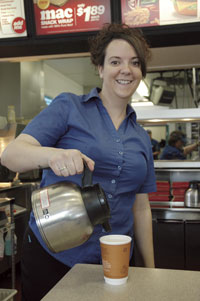 McDonald’s Restaurants started a java-fueled fight last week when the fast-food chain began giving away free small cups of their Arabica bean coffee last Monday. Starting April 20 through May 3, McDonald’s’ across Canada started a battle for consumer’s coffee dollar with their no-purchase-necessary giveaway every morning from 6 until 10:30 a.m.

“We just want to get across that we have been selling great coffee for years, and for people to try it themselves,” says Brandi Schneider, co-owner of both McDonald’s in Drumheller. “And who gives away free stuff, no strings attached?,” Schneider added. “It shows how confident we are that we have the best coffee.” With Drumheller’s lack of another coffee-based chain restaurants like Tim Horton’s - to the dismay of a few coffee drinkers The Mail talked to, the java fight won’t be heating up in the valley this round. Tamara Quiring, owner of Iamara Cafe in downtown Drumheller, said she was unaware there was a coffee war being fought. “Healthy competition is always something to welcome,” Quiring says. “If they want to give away coffee for free, giddy-up.” Quiring added local coffee shops like Iamara already have a loyal customer base, and the impact has not been seen by the recently opened cafe. “Customers go where they like it the most, and come back for a reason” Quiring said. Along with promoting the 100 per cent Arabica bean coffee, McDonald’s also introduced new cups which do not require heat-protective sleeves, and lids which aim to prevent spilling. “The same people are coming, we already have a loyal customer base. We are just encouraging more people to try,” McDonald’s owner Schneider said, mentioning coffee have noticeably up since the promotion started. “It’s good coffee,” said one man drinking a cup in McDonald’s. “But I can’t tell the difference between one to the other.” Coffee is the number one beverage choice across the country, with Canadians averagely drinking 2.6 cups a day, according to the Coffee Association of Canada. McDonald’s Canada had released that in February alone, the franchise sold 1.3 million more cups of coffee that during the same period last year. “We know that Canadians are serious about their coffee, and so are we,” said John Betts, President of McDonald’s Restaurants of Canada Limited. “To prove it, we’re inviting Canadians – including those who have yet to try our Premium Roast coffee – to experience for themselves what we believe to be the perfect cup of coffee, on us.”