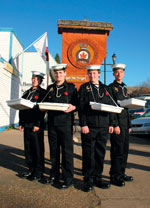 Members of the Royal Canadian Sea Cadet Corps Furious of Drumheller were out in full force on Saturday, November 1 to kick off the Poppy Campaign leading up to Remembrance Day.  The Cadets blanketed the downtown core, and also were at the entrances of major retailers throughout the valley, selling poppies.  At form up Saturday morning are (l-r) NE Malcolm Tait, LC Andrew Rock, LC Johnathan denBrok and PO2 Travis Stirrett.