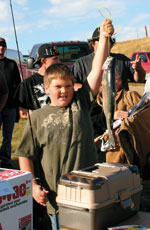 The Ryan Savary Memorial Fishing Day returned after a year hiatus last Saturday at Michichi Reservoir. Jayden Sieppert, right, was the winner in the youth division with a 3.6 pound catch. He won a spinning combo. It was also the biggest catch of the day overall. The annual derby was founded in memory of Ryan Savary, a young man killed in an automobile accident. Despite a year off last season, the interest remained strong with almost 70 entries casting. Blaine Zacharuk was the winner of the adult division and Chris Darichuk won the special event by catching a fish with a weight closest to the largest catch by Savary from Michichi Reservoir. Ryan’s father Alex put up this year’s prizes, and the proceeds from the event will be donated to The Salvation Army in Drumheller.