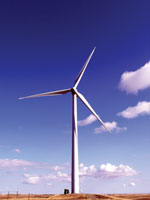 The windy plains east of Delia may be spotted with towering wind turbines by 2011.
Nexen, along with Joss Wind Power, held an open house at the Delia Community Hall on Wednesday, September 24, to explain to the public their proposed wind power project.


Nexen has acquired land leases from Joss Wind Power in the Hand Hills area, where they plan to build wind turbines. These turbines would be an environmentally friendly, renewable energy resource.
The Hand Hills wind power project is only in its preliminary stage, they have just sent in an application this year.
When asked why this area has been chosen, Tim Benko, facilities manager at Nexen, said, “This area has an exceptional wind resource, and this area of Alberta is good because typically, when the wind is not blowing in areas such as Pincher Creek (where other turbines are), it typically blows strong here.”
The company has done extensive research to see if this area will work well for the project. There are also four other projects proposed by other companies, to be built in the region.
There are a number of constraints to be analyzed in order for the project to become a reality. A thorough environmental assessment needs to be completed, including; historical resources of the land, known wildlife species, topography and setbacks from residences and existing infrastructure.
Nexen plans to complete the first phase of its environmental assessment of the project by December 31, 2008. More information regarding the project will be presented at Nexen’s second open house currently planned for late 2008.
After all constraints are understood and regulatory approvals are in place, Nexen will then begin construction of the wind farm. New power lines are needed, along with roads for the transportation of equipment and materials.
Currently there is only a 69 kiloVolt line in place, however the project would require an upgraded transmission line to carry the newly generated power to Alberta’s electrical grid.
The number of proposed turbines is not clear, “It depends on environmental constraints, noise modeling, and also depends on what type of turbines are being ordered, as some have better yields than others,” Tim Benko said.
Currently Nexen knows some deaths to birds and bats will occur as a result of turbine operation.  Information collected and shared from wind farms throughout the world indicate this to be true.  However, each project is unique based upon the configuration of the project and concentration of birds flying through the area.  The exact number cannot be guessed at with any certainty.  As such, Nexen will be monitoring the turbines for birds and bat mortality for two years following construction.  That data will be shared with regulators, and other industry members, in an ongoing effort to further understand the long term effects of wind turbines on birds and bats.
To eliminate these factors, the turbines are not placed in a straight row, and each one is equipped with lighting.
Nexen is a Canadian based, resource giant, with oil sands in Alberta, off-shore oil plants in Yemen and involved in many projects throughout the western hemisphere. Their goal for developing this project is to eventually become “carbon-neutral”, to eliminate as much carbon emissions as they produce.
The Nexen representatives explained Wednesday night, that essentially when the power from the turbines enters the power grid, energy generators, such as coal plants, “turn down their knobs” because the demand for power is reduced.
Nexen also co-owns the Soderglen Wind Farm, located 20 kilometers southwest of Fort Macleod, Alberta. It began production in 2006, and is one of the highest yielding wind farms in Alberta.
The proposed time line for the project is to have the environmental assessment completed this year, to gain federal, provincial and municipal government approvals in 2009, to build infrastructure upgrades and construct roads and turbine foundations in 2010 and by 2011 to have the turbines erected and commissioned.
Wind turbines are growing as a resource in the world. With an oil crisis looming, Canada has become a world leader in wind power. In the industry,  81 per cent of companies indicated their head offices are in Canada. The average increase in revenues for wind energy companies in Canada was 35 per cent in 2007. Wind energy is an affordable and reliable source of energy, it powered over 315,000 Canadian homes in 2006.