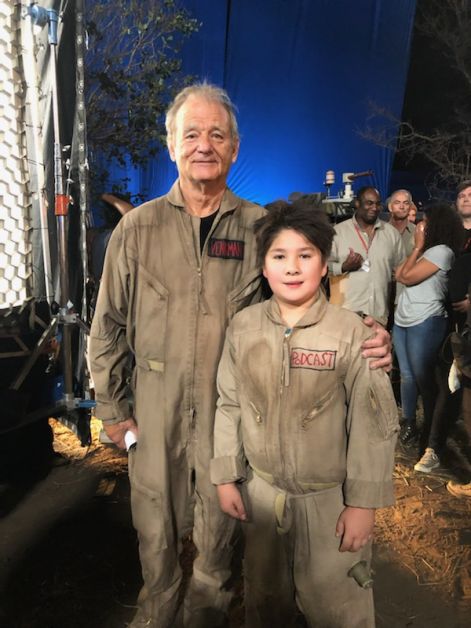 The premiere of Ghostbusters: Afterlife in Drumheller on Friday, November 19, was well received by a sold-out crowd. For one Drumheller youngster, he didn’t have to see it; he lived it.
Callum Mah, 13, son of Ed Mah and Brandi Schneider, had the opportunity during the summer of 2019 to work closely with the productions as he was cast as a photo double for one of the main actors. Calum spent from July to October working closely with Logan Kim, the actor who played Podcast.
Ed explains Callum and a girl named Sydney Scholfield from Linden showed up to an open casting for the Netflix feature Lost In Space. They had not heard anything for about a year until they received a call out of the blue. Even then, it was fairly secretive.
“They said if he was indeed interested, it would be a fairly substantial role, and that is about all they would tell us,” said Ed. “They said he would be a photo double for one of the main actors, and if interested, he would have to come in for an audition.”
He auditioned in front of writer and director Jason Reitman and Kim, and he and Sydney got the part.
From there, he spent much of the summer and in to fall on set. This took him all over Alberta, including Fort MacLeod, Turner Valley, Crossfield, and Calgary. Interestingly enough, the one location he did not work at was Drumheller.
“And we were a block away from where we lived,” said Callum.
While he was classified as an ‘extra,’ because of the role he played in the production, he had his own dressing room and had to go through make-up each day he worked.
“Because I was a photo extra, I got to interact with the actors quite a bit,” said Calum, adding he was most excited to meet Bill Murray.
As a youngster, he was accompanied by either mom or dad while on set, and as the shooting progressed into the school year, a tutor was brought in for the youth to keep their studies up.
While he did not attend the premiere in Drumheller, he attended Calgary the next day with his partner photo extra and even received some gifts from the director and the production.
As for the finished product, Callum says, “Oh it was so good!”