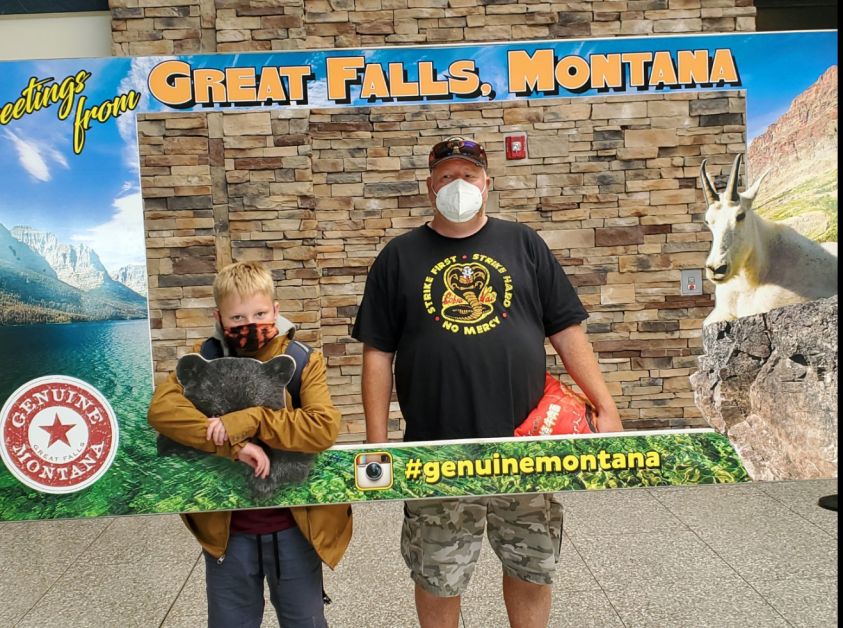 A Rosebud area man feels like he is a prisoner in his own home as he and his family wait out a quarantine after travelling to the US.
Craig Smith of the Rosebud area tells the Mail that what started out as a joyous occasion became mired in politics, bureaucracy, and ultimately being confined to his home for at least 14 days.
The family travelled to Nevada for his sister’s wedding. She and her husband work in a hospital in Nevada.
“They were unable to get time off until now just because of how crazy things have been,” he said.
It was a small wedding and the family booked their flight down. They took a COVID test prior to leaving, and the family is vaccinated with the exception of their 11-year-old son.
On their way home, they flew to Great Falls Montana where their car was waiting. There they took a COVID -19 test, which came back negative.
“We asked at the COVID testing place if this was the right test to cross the border into Canada, and they said yes, this is the test everyone is getting. That was our mistake,” he said.
The test wasn’t recognized at the border by Canadian Border Services. They were told it was the wrong test. Since then, they have learned it was in fact the proper test. But that was not before they were ordered to quarantine.
“They wanted to put us into a confinement quarantine, except we told them we live on a farm and we have animals and don’t have anyone to look after them for 14 days. They decided to let us drive home, and we had six hours to get home. We did take the proper polymerase chain reaction (PCR) test before we left the border and it was also negative,” he said.
Since then the family has been holed up on the farm in quarantine. This has caused his son to miss his first days of school. His daughter was also set to start university, but now she is confined to the farm. He and his wife are both unable to go to work.
He reached out to his MP, Martin Shields but did not receive any help until he reached out to Orrin Bliss, a candidate running in the federal election, who posted their story on social media. He also called Premier Kenney’s office, the Alberta Minister of Health Tyler Shandro, and Michelle Rempel-Gardner.
Bliss was able to provide a phone number to appeal the decision made at the border. His attempt was unsuccessful.
Smith says on day eight they are to take a second test. He was told it could take up to 10 days to get the result, which would push his quarantine from 14 days to 19 days.
“I feel like I have been put in COVID jail, and I am being punished,” he said.
He has since learned the test he took in Great Falls was in fact a PCR test. He told the Mail on Friday he was talking to Martin Shield’s office, and they suggested they verify which test he received.
He received the hard copies of his test, has since sent them to the Canadian Border Service, in hopes of it being rectified.
“There is still is no verdict as to when we can get out of quarantine or not,” he said.
He explained when you get the test, the result is sent via text message, and it didn’t show the type of test it was.
“I would warn people, before you cross the border, make sure you are getting the PCR test, and do not cross the border unless you have it.”
“Even when you get the right test you can still end up in this nightmare.”