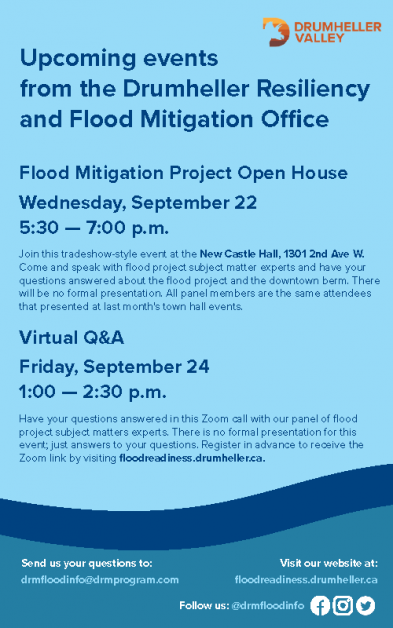 Residents had an opportunity to learn more about the environmental aspects of the flood mitigation project.
The flood mitigation office held a virtual discussion with senior environmental engineer for Sweet Tech, Julia Tarnowski, on August 30. This event was to discuss the environmental impacts on plants and wildlife.
She said early in the project, they undertook aquatic and terrestrial surveys of the sites.
“The goal of that was to identify any sensitive habitats that should be avoided or would require mitigation if disturbed. It also helped to identify timelines for certain activities and any monitoring requirements that would need to be implemented during construction,” she explained. “These surveys are definitely helping to provide input into the engineering and designs, and the dike alignment where there are potentially sensitive habitats that need to be either avoided or mitigated.”
To work near the Red Deer River, they need to attain approvals from the province under the Alberta Water Act, and federally they also need the work reviewed or approved under the Fisheries Act and the Canadian Navigable Waters Act. The work with the regulators to explain the extent of disturbance, mitigation efforts, and monitoring during construction periods.
She said they are looking at some aspects of the project that can create a disturbance within the waterway, such as bank stabilization activities, which are minimally invasive. More evasive measures could be where the dike extends into the watercourse.
Another regulation they adhere to is the Migratory Birds Convention Act, which stipulates not harming migratory birds or disturb active bird’s nests or disturb active nesting activity. To achieve this, they survey the area they are working in before removing trees, within a certain window that they are not impacting actively nesting birds. They work with biologists and agrologists to survey and monitor. The same sort of surveying and monitoring also applies to wildlife.
Environmental monitoring continues through the construction process, typically weekly. When there is work within 20-30 metres of a watercourse, they monitor for runoff and erosion. This work is done by qualified professionals in the field they are working.
One major concern of residents is the removal of trees. Tarnowski explained trees cannot be in the dikes because they can create a pathway for water to get into the dike and comprise its strength, leading to erosion. The large root balls can also be undercut by water, and if the tree topples, it can take out a large portion of the dike.
“Now you create an even larger weak spot, and potentially you can have a catastrophic event with the dike, and it could breach,” said Tarnowski.
The town and the flood mitigation office have employed technology, using a GIS map recording the locations of trees, and it will extend through the project area. This will help determine where trees will need to be removed and also help determine a long-term strategy for replacing the vegetation.
“The town has committed to a 5:1 replacement strategy. Ultimately that will mean the trees will be replaced with a variety of vegetations: trees shrubs, and grasses, within the general areas they are removed from,” said Tarnowski. “Most of the vegetation work cannot be completed until the dikes are completed.”