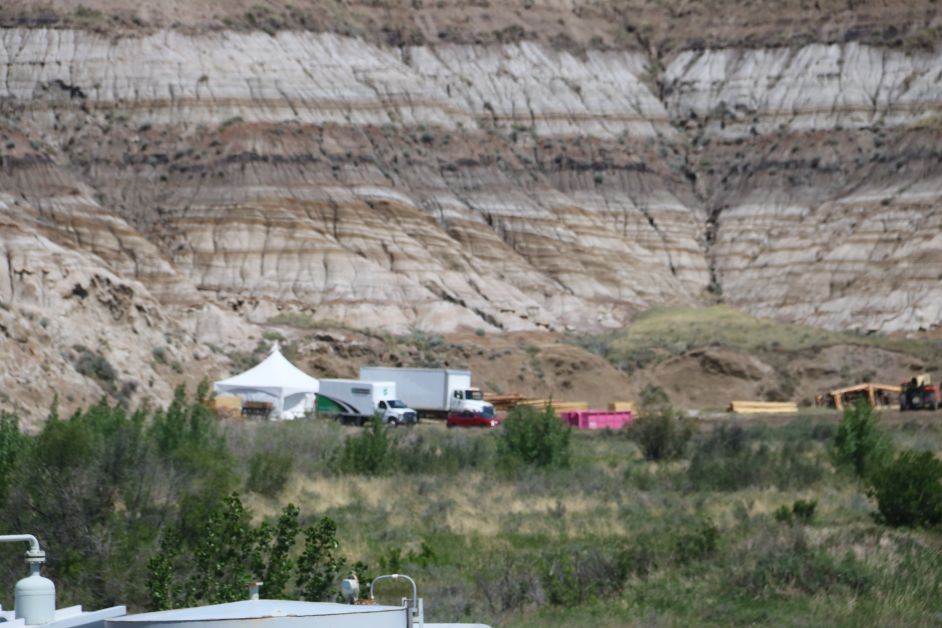 Coming out of the pandemic, the Alberta motion picture industry is booming, and Drumheller is part of that picture.
Over the last couple of weeks, the community has been buzzing about the Billy the Kid production near the Hoodoos. Observers could see a western-style set as well as production vehicles.
The series is based on the life of cowboy gun-slinging legend William H. Bonney. It is reported as a coproduction between Epix Studios and MGM International Television production. This will be its first season.
“Drumheller, as it is seeing with the production there right now, is one of our main selling tools. It is a big selling tool for us when we are in Los Angeles attracting these productions,” said Luke Azevedo, vice president of Creative Industries and Film Commissioner of Calgary Economic Development. “With the growth of the industry right now, you are going to see a lot more tents up in your regions. There is going to be a lot more spending there, and there is going to be bigger projects with the capacity to have an impact on the local economy.”
Drumheller has been a popular location for filming and has doubled as everything from small towns to the old west, the Mongolian countryside, to even outer space.
Azevedo says many factors are spurring the growth right now. Alberta is considered a safe space for filming during COVID-19. Another factor is the provincial government transitioning tax credits and eliminated the per-project cap.
“It now makes us nationally and internationally competitive to attract projects here long term,” he said.
There has also been considerable investment in infrastructure with studio space being developed, including the Calgary Film Centre that can facilitate production year-round.
“The most important aspect of our work here is our human resources. Our crew base is known throughout the world as some of the best crews anywhere. It is not just behind the camera, but in front of the camera as well,” he said.
“When you add that to mountains, the badlands, the prairies, the foothills, and all the film-friendly areas we have here for different projects to engage in, it is a very enticing location.”
He adds the world closely with local communities to facilitate the industry.
He sees these changes will make the industry viable for years to come.
“As we grow, we have to ensure all the aspects are growing at the same time. We can’t have a lacking. We look at it as a three-legged stool. Safety is overarching, and then we have crew, incentive, and infrastructure. If you look at those three areas, you need to ensure they are growing at the same time. The demand is there.”
“One of the things that is happening now is because of the pandemic, there was so much consumption of content globally, and there was no content being made for about three and half months. That’s a big chunk of time in a production cycle.”