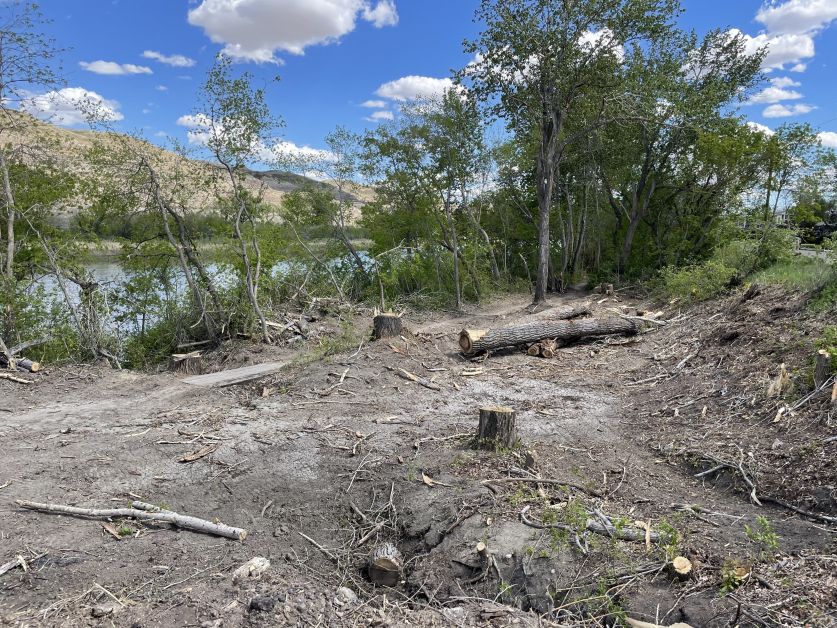 The Town of Drumheller Council has invited Municipal Affairs in to look at the flood mitigation program.
Last week a letter was sent to the Honourable Ric McIver, making him aware of a local petition circulating.
“Despite the petition and in the spirit of full transparency, the Town of Drumheller requests your office commence an immediate review of our program with regards to contracts, finances, and the questions put forth in the petition,” states the letter.
This letter comes after the Town of Drumheller issued a directive to Scott Land and Lease to part ways with the former communications team. CAO Darryl Drohomerski explains the original communications team was hired as part of the Scott Land and Lease contract. In December of 2019, council awarded the land services contract for the flood mitigation project to Scott Land and Lease and authorized an initial appropriation of $1.2 million for the contracted services and a further $150,000 for advertisement and public engagement.
“Scott Land contracted the communications to provide communications for basically everything,” said Drohomerski. “For the new team instead of Scott Land and Lease hiring them, they will be hired by council.”
Scott Land and Lease continues to fulfill the primary aspect of its contract, which is land services.
The interim team is working under the direction of council, and council will be putting out tenders for a new communications team in the near future.
He explains council has asked Municipal Affairs for an inspection to provide transparency on the project.
“What we are doing with the letter and invitation is basically, ‘we have nothing to hide, so before you hear it on the street, hear it from us that we would be happy to have you come and talk to us for an inspection,’” said Drohomerski.
They have asked the scope be the flood mitigation project.
“They were invited in to limit the scope of their inspection to address the three questions put forth in the petition,” said Drohomerski, adding Municipal Affairs are not restricted in what they wish to inspect.
In the meantime, council has issued a stop order on work on all outdoor construction work related to the berms, and has directed the flood office to clean up the tree trimming work. Landowner negotiations and engineering work will continue.
At the Monday, May 31 council meeting Mayor Heather Colberg said the council is committed to the flood mitigation project.
“Drumheller is at serious risk for a flood, and it is for that reason council and I will continue to move forward on this program,” she said.
Councillor Jay Garbutt, at the meeting, acknowledged work needs to be done to restore trust.
“Despite some good work being done, some flood program activities have diminished public confidence, and we know restoring that confidence will take several steps. Actions are louder than words. But as previously noted, council is unanimous in our commitment to the project, and unanimous in our demand going forward activities of the project are communicated before they happen,” he said.
Drohomerski explains one of the stumbling blocks for releasing the plans for the dikes is the office working with the province to recognize a regulated flow rate in the river to build the mitigation.
“The province is contemplating changes, and that is really what has resulted in us not wanting to go too far ahead on design, knowing we might have to end up having to change designs because of elevations of dikes,” he said.
The dike work is also to protect critical infrastructure, like the lift station near Schumacher’s Corner.
“The 5th Street Lift Station basically takes all the sewage from every place west of it. This includes downtown, Newcastle Nacmine, Midland, and Bankview,” he said. “That is a key piece of infrastructure for wastewater in the town.”