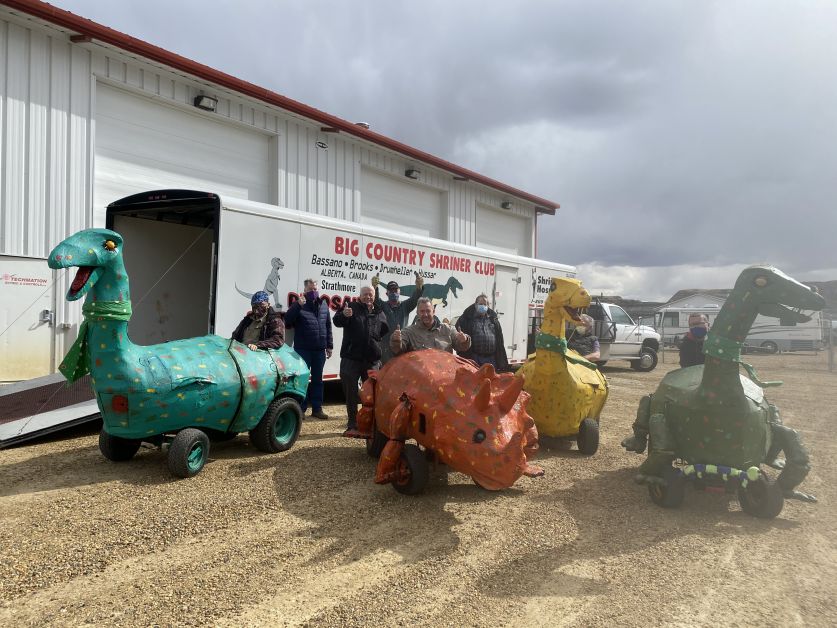 The Dinosaur Patrol has made it back to the valley, and local Masons and volunteers are making sure they are ready to celebrate.
Darwin Durnie, member of the Masons, tells the Mail the Dinosaur Patrol, a collection of miniature driving dinosaurs has its roots in Caveman Days, around 1969.
“Right about that time, Jack Durnie and Tig Seland started Prehistoric Park and built a lot of the wire-framed dinosaurs, some of which are still around downtown,” explains Durnie.
After Prehistoric Park opened, they moved their shop from the current Image Crafter building to a Quonset on the site in what is now the Hy-Grade Industrial Park.
The idea of the Dinosaur Patrol came from local Masons and Shriners.
“What is significant about that is 150 years ago, the Shriners started the horseback patrols around the country because we didn’t have cars then,” he said. “The mounted patrol was a big thing in Calgary.”
This local group of Masons thought it would be fun to replicate the patrol, but with dinosaurs.
Some of the instigators included Seland, Al Rutz, Ken Lowen, and Ralph Pallesen. Pallesen had the John Deere dealership, and they purchased lawn tractors. The dinosaurs were made with the same wire-frame technique as the dinosaurs at Prehistoric Park. They took care to put reins and

saddles on the dinos, just like the mounted patrol they were replicating.
All the creators have since passed, and it has been years since dino patrol has been in the parade. The Big Country Shriners Club, which encompasses an area from Hanna to Brooks, Strathmore, and Drumheller, took over the patrol and continued to appear in parades.
This group has been aging and not been as active. Durnie inquired about the patrol, and he learned they were being stored in a trailer at the Bassano airport.
“They are octogenarians, and they said, ‘hey that’s great, you guys can take this over, but we still get to ride them in the parade,’” said Durnie. “We hope to get them rolling for the July 1 parade.”
The ownership will remain with the Shiners, but the Drumheller Mason Lodge #146 and Symbol Lodge #93 and local Shiners are going to take care and operate them. Other locals are also working with them to get them ready.