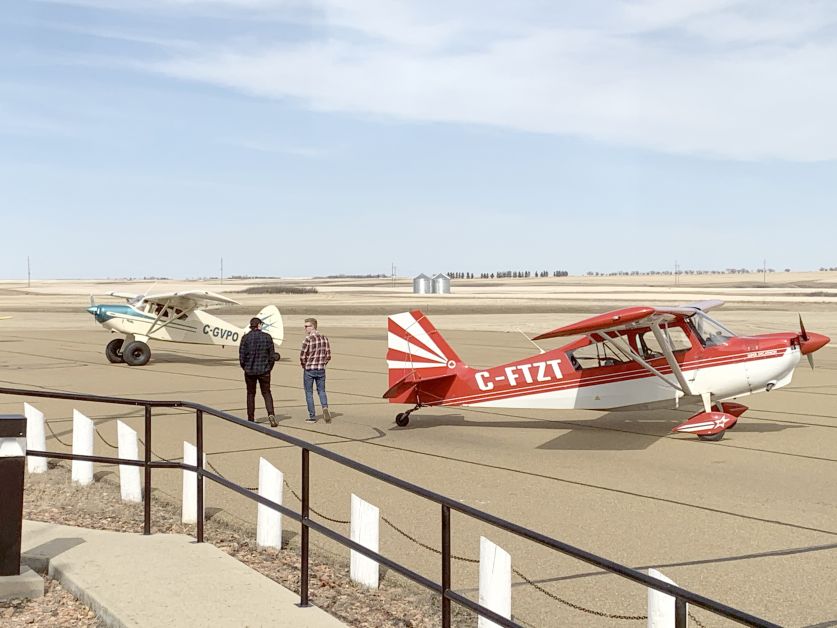 The Drumheller airport committee is looking at reviving the facility, making a gateway to the community.
The airport has been active since the 1960s and at one time was a hub of activity with an active flying club and even charters. While it remains busy with an active crop spraying business, a core group of local flyers, and healthy private and commercial traffic from Alberta and beyond, it is often overlooked.
“The airport lost touch with the town, and the town lost touch with the airport,” said Patrick Bonneville, who, along with his wife Catherine began managing the airport about a month ago. “That’s for a variety of reasons, the flying club shut down years ago, and members drifted away. It is geographically dislocated from the town centre, so out of sight - out of mind.”
What they are hoping to do is increase the storefront traffic, and capitalize on the traffic that is there. About three years ago, a self-serve credit card fuel station was installed at the airport. This has increased sales, but it could be more, and they have begun to price fuel competitively. One of the keys is to have visitors of the airport become visitors of the town.
“The aviation gateway to the town is the airport,” said Bonneville. “The number one complaint is how do we get access to the town. Polling through the pilots who have landed in the last month or so, said a short-term courtesy vehicle available to pilots and their families was needed. We have already purchased one and placed it up at the airport.”
He said flying groups are already utilizing the vehicle and enjoying local restaurants, and shopping. “They are in and out in two hours, but in that time they had access to town,” said Bonneville, adding that as word of mouth spreads, there will be more visitations.
“The biggest thing people would like to know is, if they land, they are welcome, services are available in both winter and summer, and they have access to a courtesy vehicle and affordable fuel to fill up. Those are big winners for them, as they are for us,” said Bonneville.
Another way to increase awareness and use for the airport is through aviation and non-aviation events such as race the runway events and fly-ins. These could be fundraisers to offset the costs of the airport.
“A fly-in isn't just for people flying in, it’s for the community to get involved,” he said.
Another initiative they would like to undertake is reviving a flying club. This again is not solely for pilots, but anyone in the community who is interested in aviation.
They have three fly-ins slated for this summer, and these events are open to the public to come and learn more about aviation.
The airport has also been in talks with the Alberta Aerobatic Club to come and use the facility and are looking at July dates.
He says they have heard interest in people wanting to take flying lessons, and while they aren’t in the position to offer those, it could be a possibility if interest continues.
He is grateful to Fox Coulee Aviation, which has helped the airport remain viable for the last couple of decades. The airport has great support from the Town of Drumheller Infrastructure Services, as well as an active committee who have volunteered to keep the airport up to date and operating.
“We want the airport to be known as a gateway, but it's a friendly place to come. If you don’t have a plane, you can come up to the terminal. It's a chance to look at aircraft, the idea is everyone is welcome,” said Bonneville.
Right now they are working on a master plan for the airport, which they hope to deliver within a year.
Keep up to date with the Drumheller Municipal Airport by going to the Fly Drumheller Facebook Page.