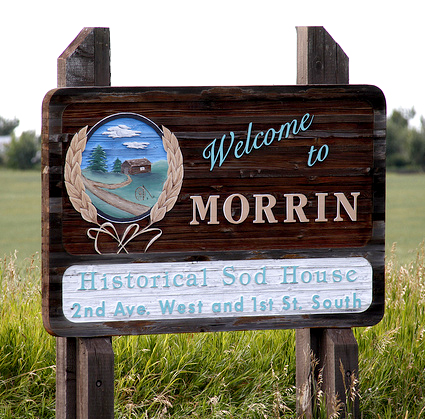 The Village of Morrin called two special council meetings in the month of September to discuss the village’s 2019 Audited Financial Statement, and the approval of the Municipal Stimulus Program (MSP).
During the Friday, September 11 meeting, council went into closed session for nearly two and a half hours. Following the closed session, a motion was carried for the village’s accountant, Endeavour Chartered Accountant, to work with Chief Administrative Officer Annette Plachner “with internal controls, deficiencies, and other matters reported as a result of the 2019 audit.”
Mayor Howard Helton stated in a memo, dated September 26, “As a responsible elected official, I could not participate in a meeting that was convened in direct non-compliance with the Alberta Municipal Government Act (MGA). Additionally, I am disappointed the Village of Morrin Deputy Mayor, Councillor, and CAO did not recognize this fact and proceeded with the meeting despite it contravening the MGA.”
According to Mayor Helton, the September 25 meeting was in direct violation of the MGA under Section 194(1): “The elected official (b) must call a special meeting if the official receives a written request for the meeting stating its purpose from a majority of the councillors.”
Mayor Helton says the only communication he received in regards to the meeting was an email from Deputy Mayor M’Liss Edwards on September 23 informing him there would be a meeting to discuss the MSI grant, and a phone number for the teleconference would follow.
No request to call a special council meeting was received by Mayor Helton from either Deputy Mayor Edwards or council. Nor was there any follow up communication with the teleconference number as per the original email.
Deputy Mayor Edwards originally announced the meeting to the public on Wednesday, September 23 on Facebook stating the meeting would be to discuss the Municipal Sustainability Initiative (MSI). A second post was made on Friday, September 25 by Deputy Mayor Edwards to correct the announcement, stating the meeting would be to discuss the MSP instead.
Other than the change to discuss the MSP, Mayor Helton noted there were a number of other changes made to the agenda.
As Mayor Helton was not present at the meeting, he states this was in violation of the MGA Section 194(5): “No matter other than that stated in the notice calling the special council meeting may be transacted at the meeting unless the whole council is present at the meeting and council agrees to deal with the matter in question.”
Included in the agenda changes were motions to accept the Stimulus Grant application to upgrade the village’s water plant and to forward it to Municipal Affairs, accept the Municipal Memorandum of Agreement, and to make a donation to the Morrin School for the Social 30-2 Award.
An additional donation to the Morrin School was also up for discussion and, according to Mayor Helton, “a commitment was made.”
“To date, to my knowledge, the council has neither received a bank reconciliation statement in 2020, actuals budget (2020) statement, nor the Audited Financial Statement for 2019,” he said. “These are the resources the council needs to be aware of before any financial commitments are determined. It is a sad state of affairs when administration and members of council decide to act with such disregard for the regulations set out in the MGA and without a full knowledge of the financial position.”