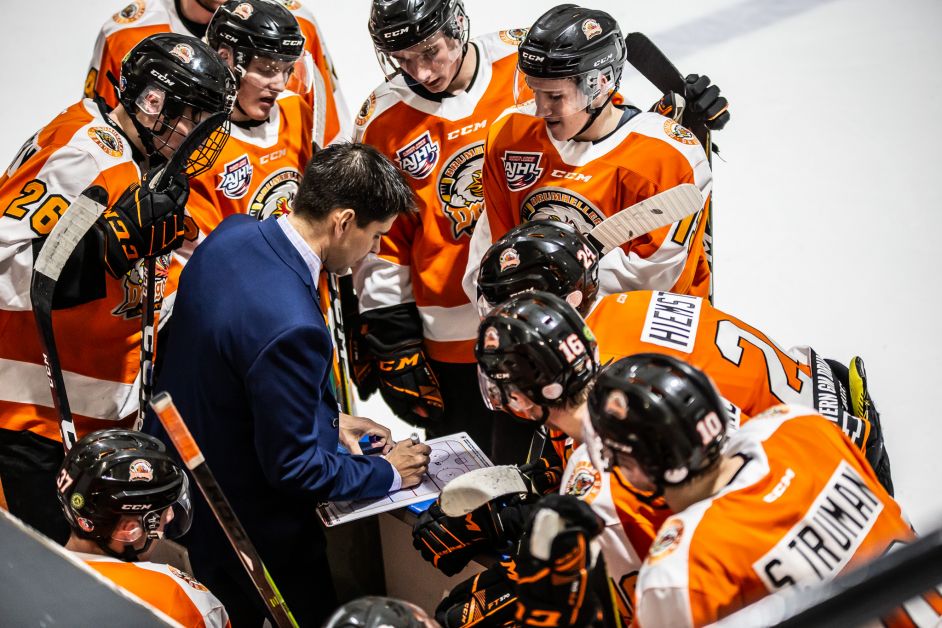 The Drumheller Dragons Hockey Club announced Monday, February 3 it has extended head coach and general manager Kevin Hasselberg’s contract by three years.
Hasselberg, who’s in his third season behind the Dragons bench, has bolstered an impressive 101-57-12 record in 170 games. This includes last season’s regular-season wins record of 37 games and 33 wins in his first season (17’/18’).
Currently, the Dragons sit 3rd in the AJHL South and have already hit the 31 win mark with eight games remaining. The team has been on an impressive run of late, winning 10 of the last 11 games.
One of the team’s biggest accomplishments under Hasselberg in the past two and a half seasons is the post-secondary scholarships earned by Dragons players, which now sits at 15 (NCAA/ACAC).
“My family and I are truly grateful for the opportunity to remain a part of the Drumheller Dragons’ Organization. Over the past three seasons, the direction the team has taken and the successes the team has earned is attributed to the many amazing people that make up the Dragons community. We are thankful to work with everyone whose efforts drive the team towards fulfilling the vision and completing the team mission. We’ve established a standard in Drumheller representative of the values that guide us, how we practice, how we play, and how we conduct ourselves in our community,” says Hasselberg.
Dragons team owner Blair Christianson said it was an easy decision for the organization to extend the contract for another three years.
“This will enable us to build on the level of excellence and professionalism that Kevin has brought to our organization over the past three seasons. Kevin is one of the hardest working guys in hockey and I look forward to both Kevin and Leah continuing to be a part of the Drumheller community,” said Christianson.
“Throughout my time here, the ownership, scouts, coaches, players and support staff have worked tirelessly to create this culture. We will continue to instill in our team the tenets of hard work, relentless preparation, and team unity as we build this brotherhood. I appreciate the confidence Blair, Rod, and Corrine have shown in me from day one, and know that the entire organization is pulling in the right direction,” Hasselberg said.
The entire Dragons organization would like to congratulate Kevin and the Hasselberg family on being part of our program for the next 3 years!