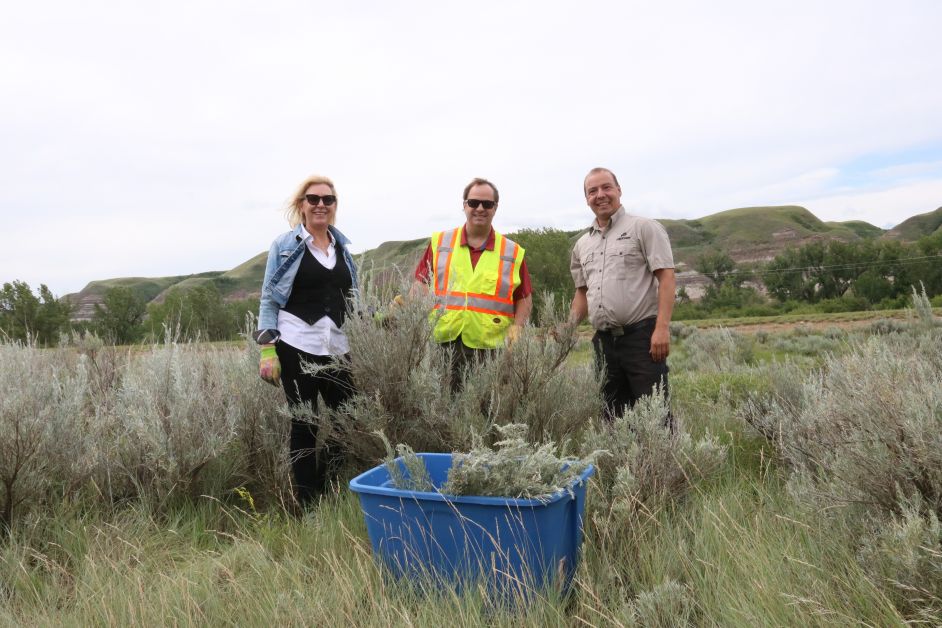 Calgary Zoo staff and volunteers were at the Hoodoo site on Thursday, July 18 enjoying the scenery and harvesting sage.

“We are harvesting the silver sagebrush to feed to the Greater Sage Grouse. The Calgary Zoo has Canada’s largest breeding and reintroduction program for that animal and we need a huge amount of sage to keep them healthy and happy,” he said.

He says they typically harvest a couple of times a year from the Drumheller area as well as near Kamloops.

“There are slightly different types of sage in each area and the animals could potentially run into either in the wild, so we give them a couple of different varieties,” he said.

This sage is used to feed the animals over winter. He explains that in the warmer season the Sage Grouse feed exclusively on insects and then feeds on the sage in the winter. After harvesting the sage, he says it will be put into a freezer until it is time to use it for feed.

Last Thursday, local volunteers, as well as volunteers from Pembina Pipelines, the Drumheller Institution, and Zoo staff were helping in the effort.

“Usually in Drumheller, it is a smaller production, this is the first time we have scaled it up and brought in volunteer groups,” Neilson said. ”We have been successful with the breeding. When we started off with 40 bird a few years ago I was able to just cut it with my staff,  but with 60 more being born year after year, I started needing a lot more bodies to make it happen.”

To secure the volume of sagebrush he needed, he approached the Town of Drumheller which helped them identify the area along Highway 10 to harvest.

Mayor Heather Colberg said they are happy to partner with the Calgary Zoo on this kind of project.