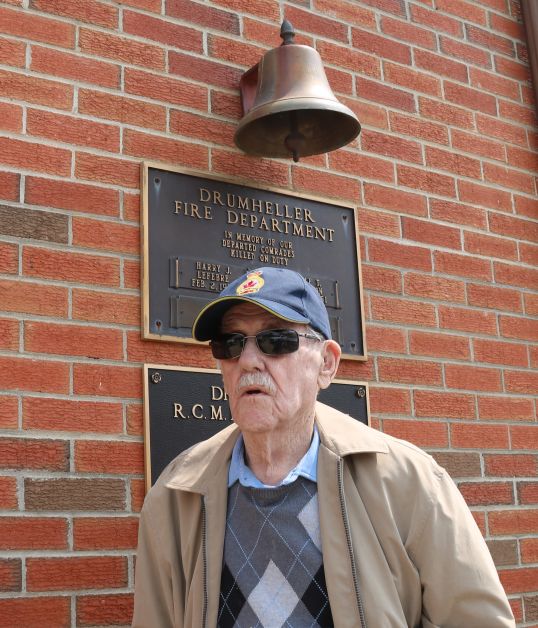 The Mail had the opportunity to dig into the living history of the Valley when it sat down with Tony Lefebre, the son of Harry Lefebre, who perished in the line of duty as a Drumheller firefighter in 1937.
Tony, who is approaching his 95th birthday, dropped by the Mail on Tuesday, May 28 to reminisce about growing up in the Valley. He is the son of Harry Lefebre, who was killed in the line of duty with the Drumheller Fire Department in 1937.
In a quick scroll through the archives of The Drumheller Mail, the name Tony Lefebre comes up numerous times, especially regarding sports. The young athlete was a star baseball and hockey player.  He played ball in Rosedale and was managed by Elmer Gagstetter. He was a contemporary of  Glen Gorbus, who went on to major league fame. John Anderson also helped Tony sign a negotiation with the New York Rangers.
While humble, he counts among his greatest athletic feats his provincial championship half mile run in Edmonton when he was about 15 years old. He raced in 220-yard and 880-yard events.
“It was my greatest sports thrill of my whole life,” he said.
In the 880, he was the last place after the first quarter. A couple of racers in the 12-man event dropped out and Tony began to make his move.
“Something happened and I don’t know what it was. I started to run faster and faster”. When he got to the fifth place, he ran past teammate Greg McLellan.
“He said to me ‘where have you been? You better get going!’”
He waited until the straightaway to pass the number two runner, as per coach Jock Pennycook’s advice and then moved into first place.
“I passed the first place guy and ran like it was a 100-yard race to the end of the track,” he said.
A memory for Tony was the day that Fire Chief William Guterson’s home caught fire. Guterson was Tony’s uncle, and the Guterson family lived next door on 3rd Street East.
On New Year’s Day, 1937, when Tony was about 12 years old, they heard hollering coming from the Guterson house.
“Next thing I know, Uncle Bill was on the Fire Phone, This was the only phone anyone had. He was close enough to our home that we could hear him report that his house was on fire. When he got off the phone, he kept hollering ‘they won’t come!’” recalls Tony.
Tony and his oldest brother Bill ran to the fire hall, and the department mobilized. These were days before there were self-draining hydrants, so firefighters had to use picks and shovels to break up the box and manure around the hydrant used to insulate it from freezing. Firefighter Tommy Coad rushed into the attic, took two steps in, missed the joist and fell through the ceiling.
It was only a month later when tragedy struck. On February 2, Tony recalls he was coming home from playing hockey, walking up Centre Street past the fire hall and you could see flames coming from the Vickers’ store. He saw his dad on the end of a hose, and  Tony approached him.
“I said to him ’you know what daddy, tonight I got my first goal ever.’”  He thought that was great but said, “You better get out of here because it is kind of dangerous”.
There was an explosion near the back of the building near where the coal oil and gas was stored and a brick hit Harry Lefebre in the back of the head killing him at age 42.
From that day on his mother raised the small family. She never remarried and lived to 102. After the war, Tony's brother Bill came home to support the household.
Bill was a character like none else. He enlisted in the Air Force and would tell everyone he would fly back after he received his wings. That day happened when he was stationed in Calgary.
One day they heard a roaring noise and a Harvard flew right over the house.
“He flipped it sideways, so he could wave, and you could recognize that it was his face,” recalls Tony. “My mother passed out on the floor because she was sure he was going to crash into the house. When he got back to Calgary, the police
were waiting for him and they
put him in jail for a month.”
Bill eventually re-earned his flying privileges, but a couple of years later became infamous for flying a Harvard under the Cartier Bridge in Montréal. This time he did a barrel roll so his marking wouldn’t be recognized, becoming a folk hero.
Tony joined the Navy in 1943. He said for his first year they kept him in Calgary to play hockey, but as soon as the hockey season was over he was shipped east. There he worked on a Patrol Torpedo Boat to protect convoys as they formed up to depart for Europe. While he never engaged with a U-Boat, he knew they were around. In fact, he said a few entered the harbour.
“We detected some of them… the odd one slipped through into the Halifax Habour. I was told they had show tickets when they finally caught them,” said Tony.
After he left the Navy he moved to Vancouver Island where he married Lil and raised two daughters BeeJay and Judy. He worked in a sawmill in Youbou for a few years and then across the lake to a mill in Honeymoon Bay. He eventually became the fire chief of the community.
He was back in the community last week with his nephew, also Tony, to visit and talk to the Drumheller Fire Department about his history in advance of the Fire Department’s centennial. For years Tony and his wife Lil would return to the valley, often taking in the Canada Day Parade.
“We always went to the Legion. We have been Legion members forever.”