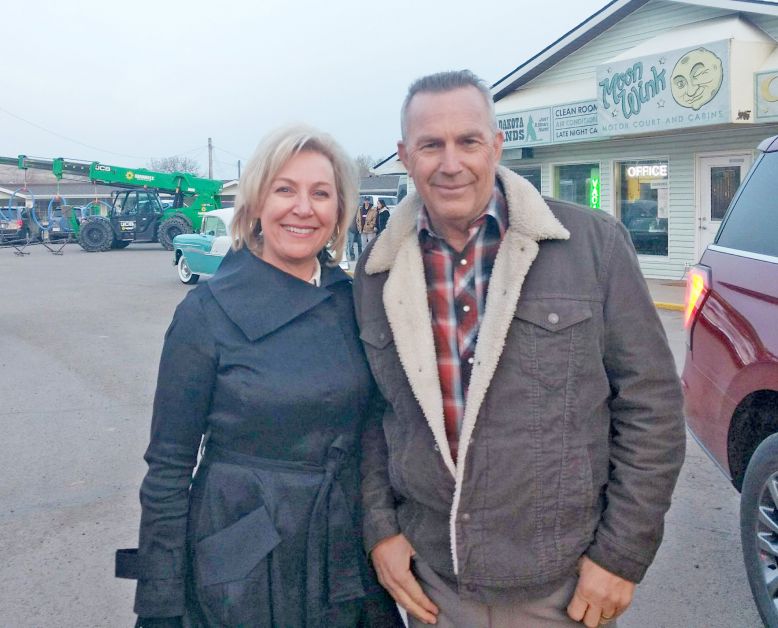 Last week Drumheller had a taste of the magic of Hollywood as the community became the backdrop of a journey across the United States for the Diane Lane, Kevin Costner feature Let Him Go.

The two stars were in the valley working on the film. Crews shot at the Historic Graham Ranch and then right in Drumheller where buildings and streetscapes were dotted with vintage-look signs and antique cars to replicate 1960’s USA.

Director of Let Him Go, Thomas Bezucha says the landscape and scenery play a big role in the movie.

“That is why we are here,” said Bezucha of the scenery in the badlands. “Today, this is the star.”

This was his first time working in Alberta.

“We knew, looking at places, what we are trying to do is show a road trip from Montana to North Dakota, so we needed mountainous terrain, through the plains to the badlands. Alberta has all of that, and that is why we are here, it has been a fantastic experience.”

Not only is the landscape attractive but so is Drumheller's downtown. Last Thursday and Friday, they were shooting at the Badlands Motel and at Riverside Value Drug Mart. The latter stood out for Bezucha.

“The Value Drug Mart reminds me so much of the grocery store my grandmother used to shop at, just the scale of it is perfect,” he said.

Ray Ainscough of Riverside Value Drugs was thrilled that his store became the Red Owl Food store for a day or two. While he didn’t manage to meet the stars, he did catch a glimpse of Diane Lane while they shot some interior scenes.

“I can't wait for it to come out, I have to see it. My only fear that they cut the scene from the store,” he chuckles.

Paula Mazur is one of the producers on Let Him Go and Drumheller has a lot to offer.

“We came to Drumheller for a reason, and that is because it has incredible, extraordinary scenery. So we are actually going to be here for two or three days, but when we were driving along the river  I said “we have to stay here longer,” she said.

‘It really shows the marriage between the green area…from the foothills to here, the badlands. It is the metaphor for where they land in their lives.”

Mazur said that they were initially concerned about having experienced crews that would be able to handle such a production.

“But we brought in very few people. Our crew is predominantly local,” she said. “It is very Alberta.”

“It has really been a privilege to be here.”