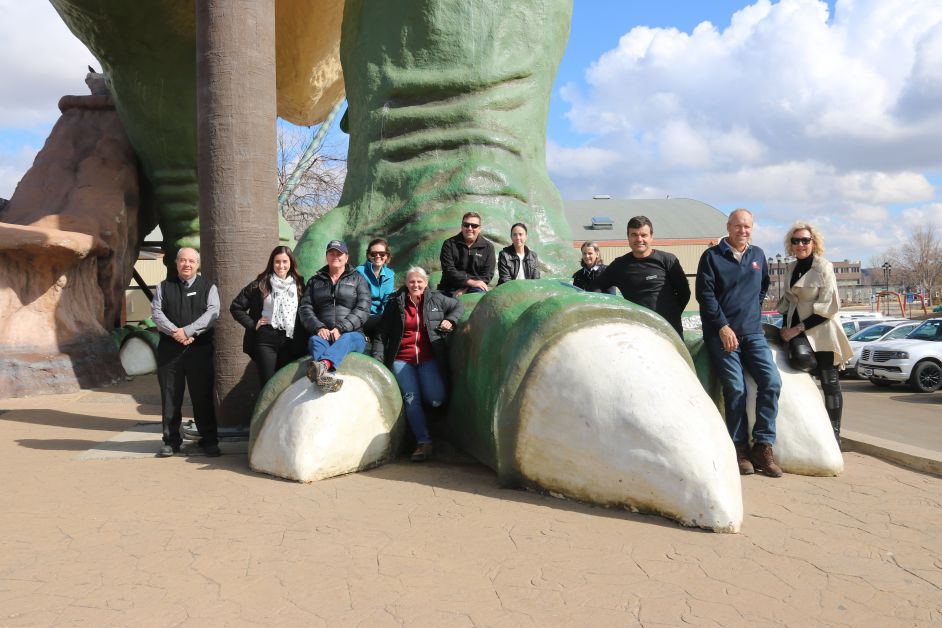 A contingent from Outback Queensland, Australia had a g’ day in Drumheller.

A group of elected officials, as well as tourism operators and museum officials from Australia, were through Drumheller on Wednesday, March 27 exploring all the valley has to offer. They toured the Royal Tyrrell Museum, the World’s Largest Dinosaur and other sites. The next day they were heading to Dinosaur Provincial Park.

There are some very unique synergies between Drumheller and Outback Queensland as both celebrate Palaeontology.

Stuart Mackenzie is the Mayor of Quilpie. His town is about 100 kilometres from Eromanga Natural History Museum. This celebrates the fertile paleontological grounds in the area.

“Drumheller and the Royal Tyrrell Museum is pretty well known in Australia. I’ve talked to a lot of people over there who have been to Canada and they have come here,” he said. “For us, it is the most well known dinosaur museum in Canada.”

“We have a small museum that has only been open for three years and we have another multi-million dollar stage being built in the next 12 months and the interpretation is still being decided on. So coming out here and seeing what you have here is terrific.”

Being a leader in a  small remote community he sees the same challenges as a community like Drumheller, learning how to capitalize on tourism.

“The six or seven cooler months of the year is when everything is humming. We are a 10-hour drive from Brisbane, which is on the coast. A center of 8,000 people is a six-hour drive away.  We are isolated, but we get a fair number of tourists. Some of the operators on this trip are getting 40-50,000,  but for Australia, that is not too bad.

Some of the takeaways from the trip he says is the museum and how the Tyrrell designs their exhibits and the story they tell, as well as some of the walking areas.

“Just seeing how the whole community works together and depends a lot on tourism, which we are becoming more so, and not being near the main centre.

Gavin Baskett is the Mayor of Winton, which is known as the Dinosaur Capital of Australia and features the Australia Age of Dinosaurs Museum. Unlike Drumheller being in a valley, their Museum is on a plateau. Winton is also home to the Waltzing Matilda Centre.

“We are pretty lucky because we are on the main route from Brisbane to Darwin, and our dinosaur museum is 10 kilometres off the highway,” he said.

“One of the main things I have come to find out is how a place like Drumheller has moved with the Museum to complement it, we have the same issue.”

One thing he was impressed with is Drumheller’s famous dinosaurs throughout the community.

“We don’t  have any dinosaurs around town so I’m taking lots of photo and we will take that and try to complement that.”