Witches, dragons, superheroes, butterflies, Teenage Mutant Ninja Turtles and more filled the halls of Greentree School for the traditional Halloween parade on October 31.
Grade six students were the first to start the parade. They would walk around the next grades classroom before moving to the next.
The class that was waiting would file behind the other class to continue the parade. When all the classrooms were reached, they would head to the gym where excited parents took pictures.
Later in the day, Downtown Drumheller was flooded with more impressive costumes. Business owners and staff waited out in the cold or in the front entrance of their buildings and handed out numerous amounts of candy.
The Pioneer Trail Seniors Centre said they have seen a year as high as 900 children due to perfect weather conditions.
The overall temperature for the day was resting around 2 degrees celsius with a skiff of snow which immediately melted. By the end of the day, the snow had turned to rain.
mailphotos by Terri Huxley 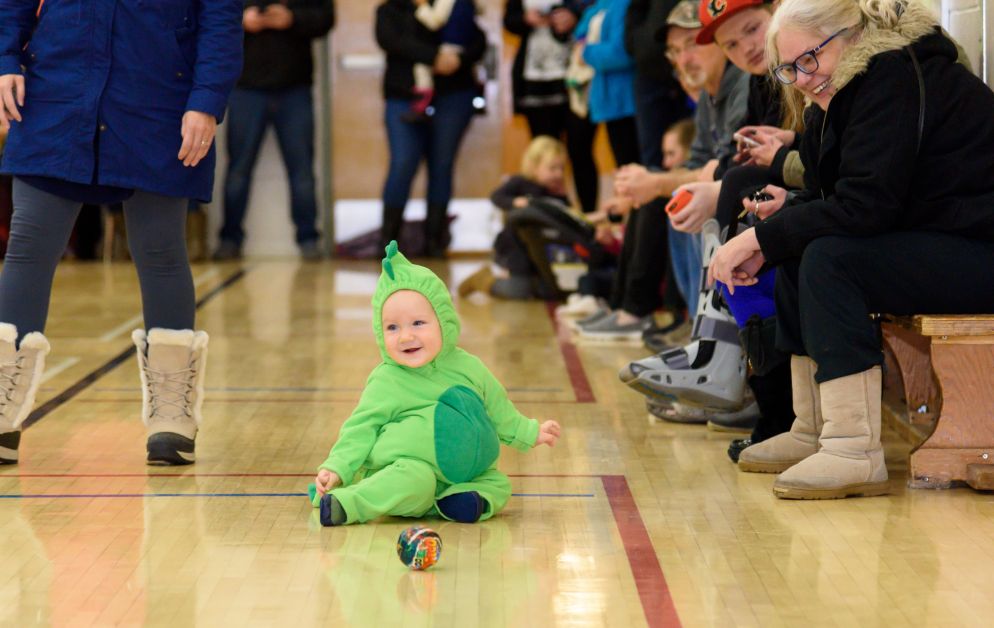 Sully Farmer, 1, was dressed as a dragon for Halloween. As everyone waited for the costume covered kids to arrive, Farmer would occasionally move around and retrieve his ball before throwing it again, enjoying every minute of it. 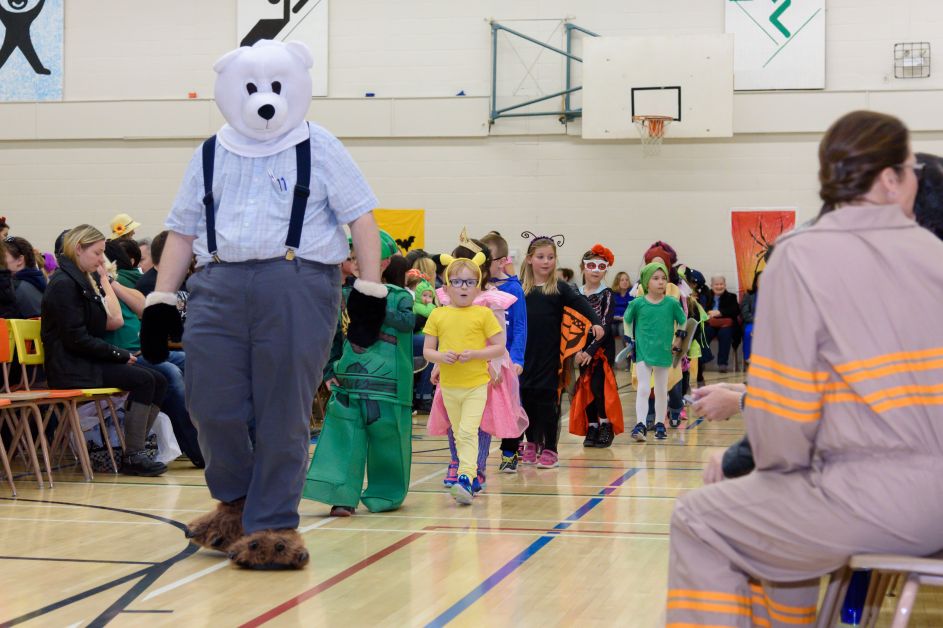 Mr. Robert Rowland led his grade one class around the gym during the parade. 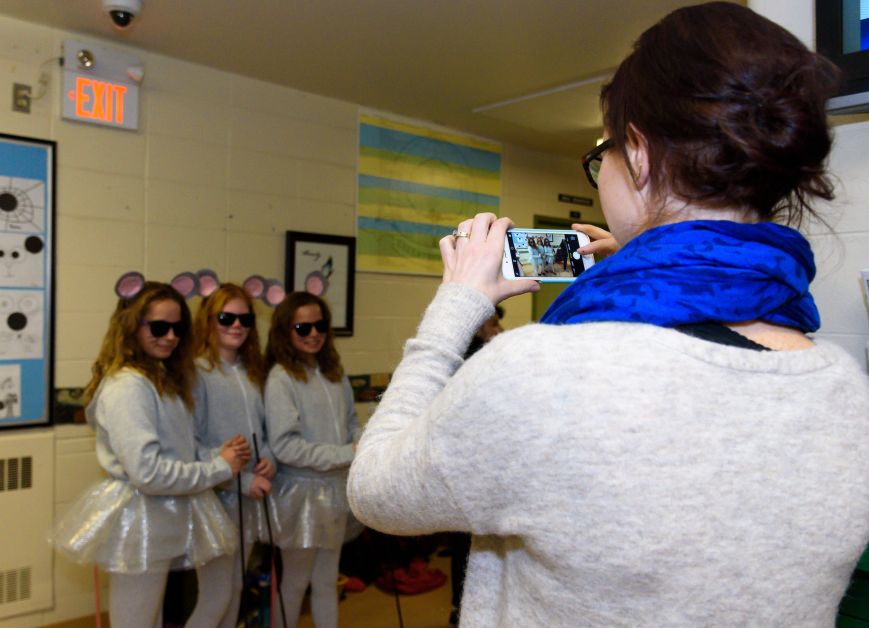 Many were excited to take photos of the variety of costumes the students had to offer. The three blind mice were even in attendance. 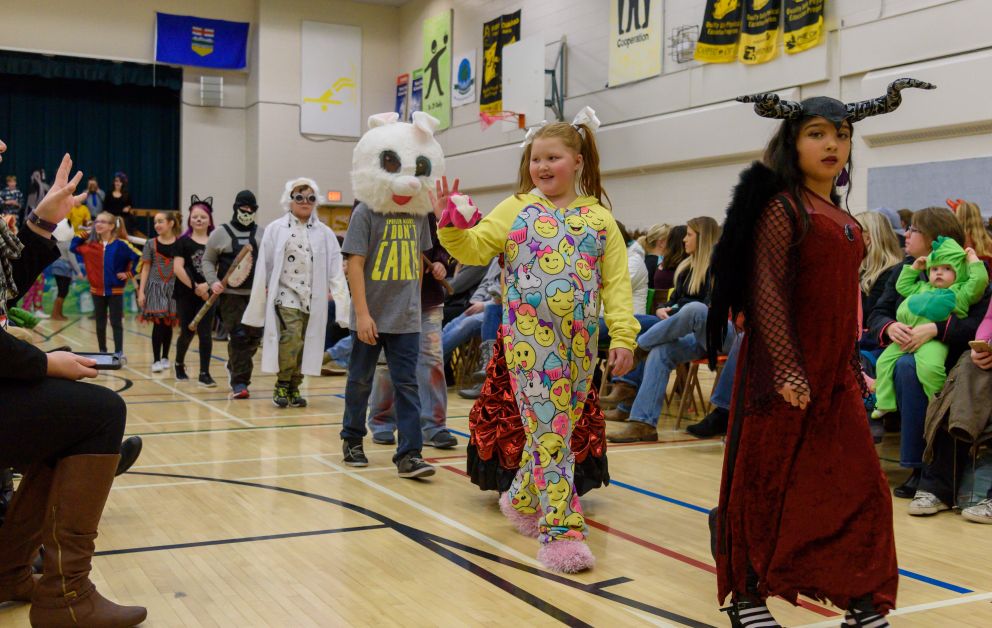 Students waved to happy parents during their single-file parade. 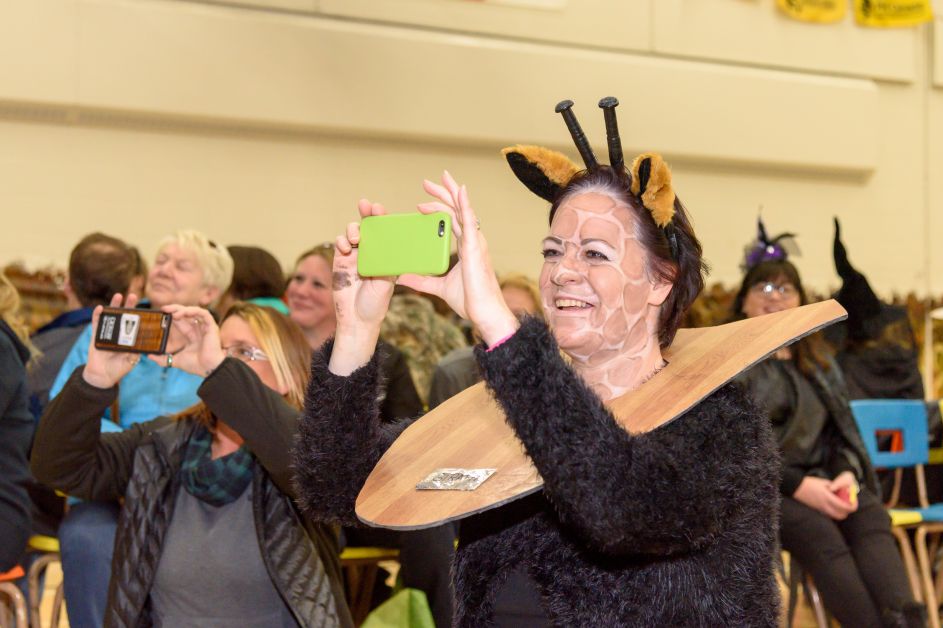 Kayla Clark takes a photo of one of the classes on the stage. She was dressed up as a mounted Giraffe. 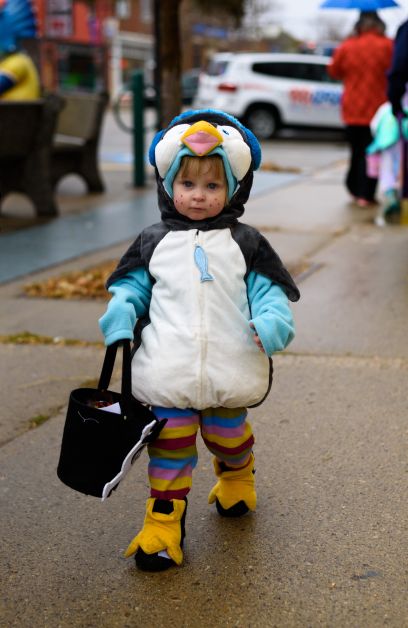 Vanessa Pitre began her Halloween in Downtown as a Penguin. 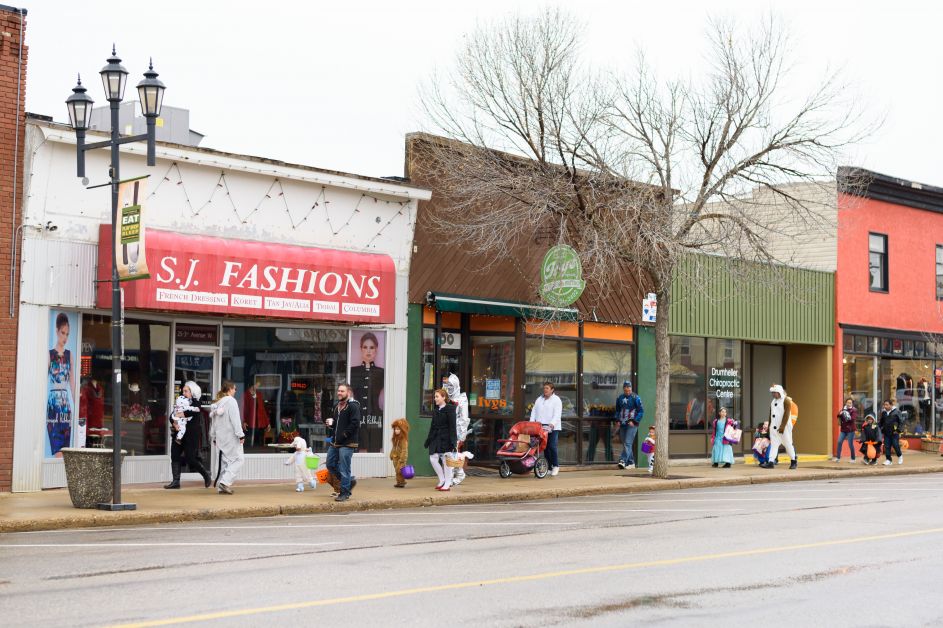 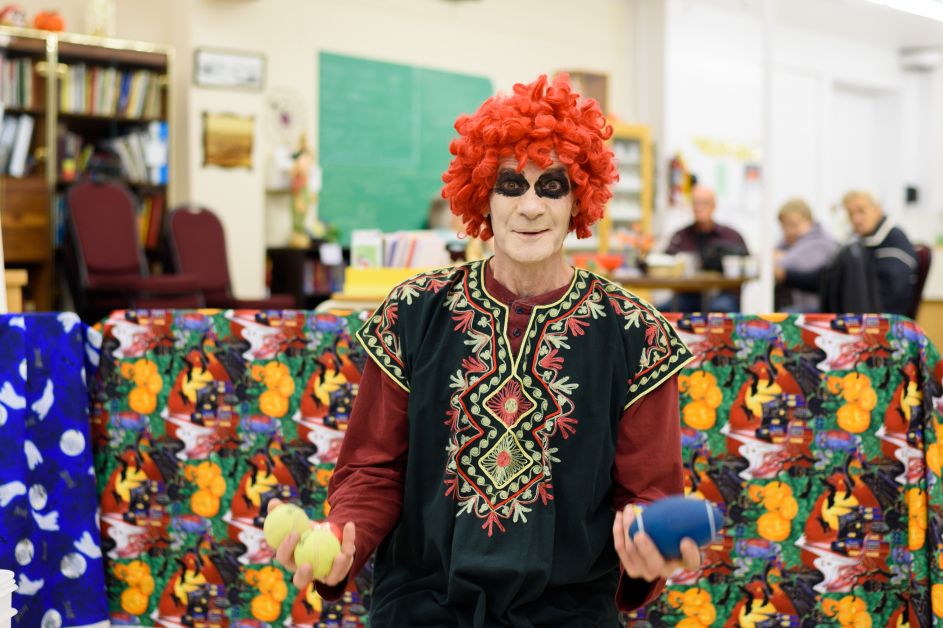 Larry-Lo Morton of the Pioneer Trail Seniors Centre dressed up and asked children to toss a ball into a bucket to win some candy. The entire centre was dedicated to Halloween with a ball toss, a fishing game, and more. 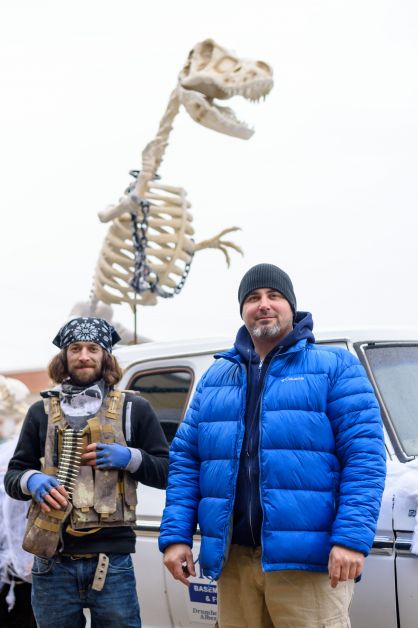 (l-r) Chad Stern, left, and Clint Keller stood outside handing out candy. They had mounted a skeleton dinosaur to the back of their truck to get into the Halloween spirit. 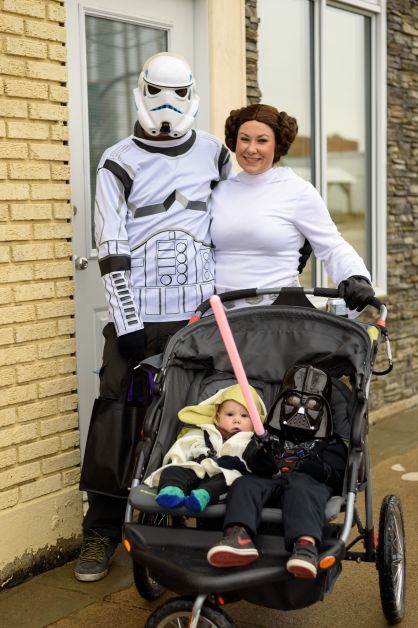 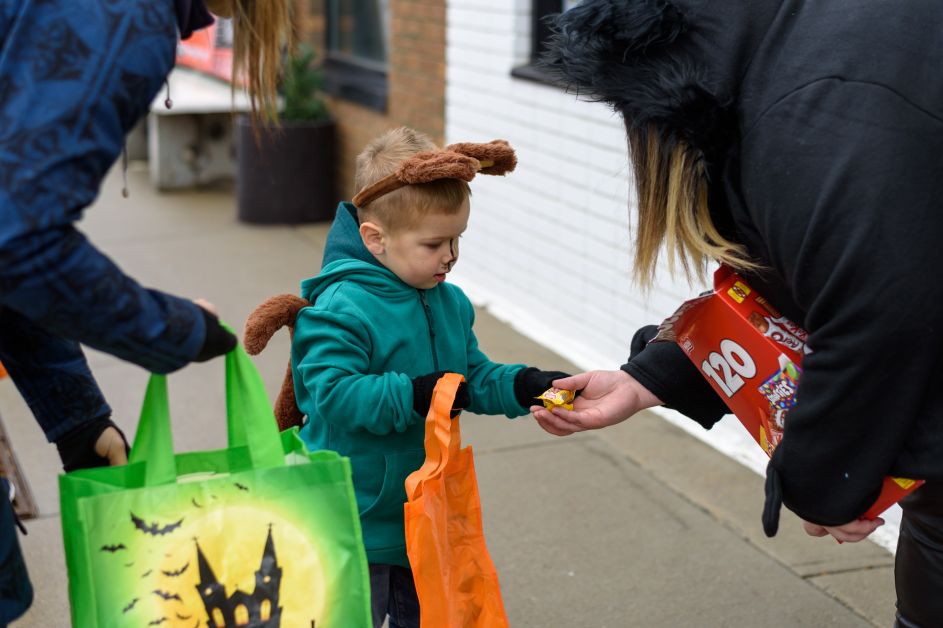 Beckett Norman gets handed a piece of candy from Century 21 staff. 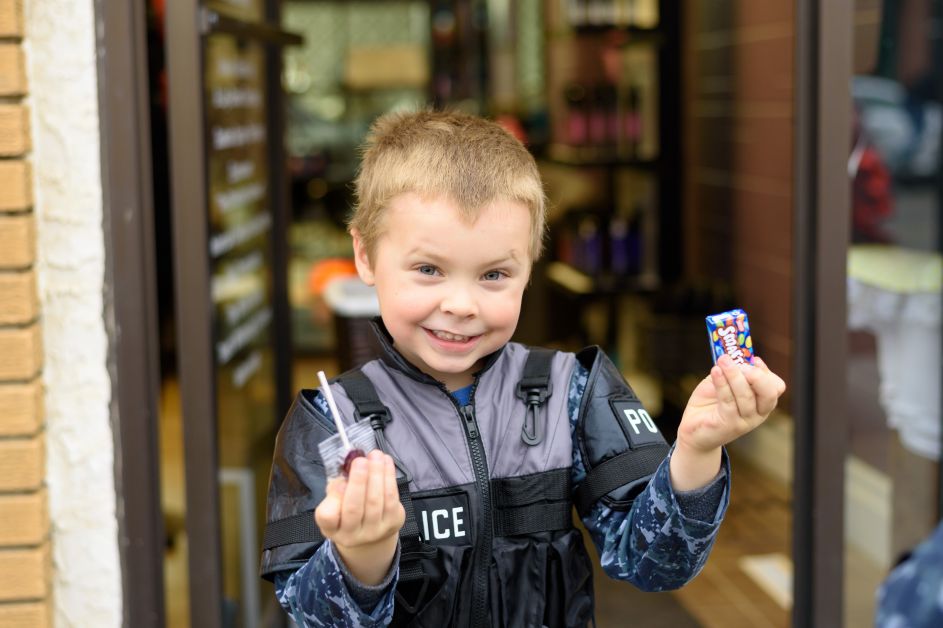 Beckam Jensen was elated to hand out candy. Here he is showing off some of the loot before giving it away to another trick-or-treater. 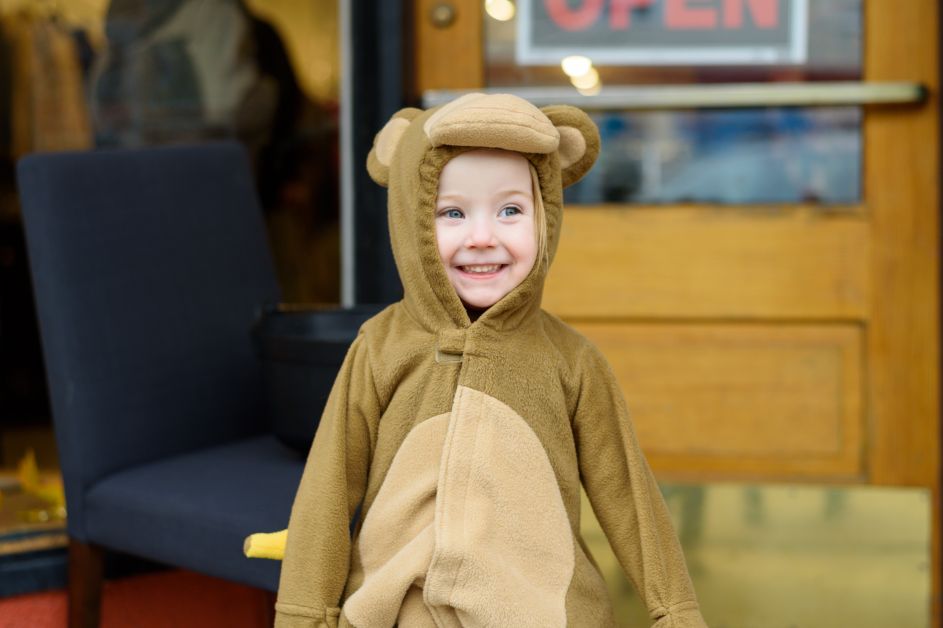 Emily Lowry was monkeying around for Halloween and helped hand out candy. 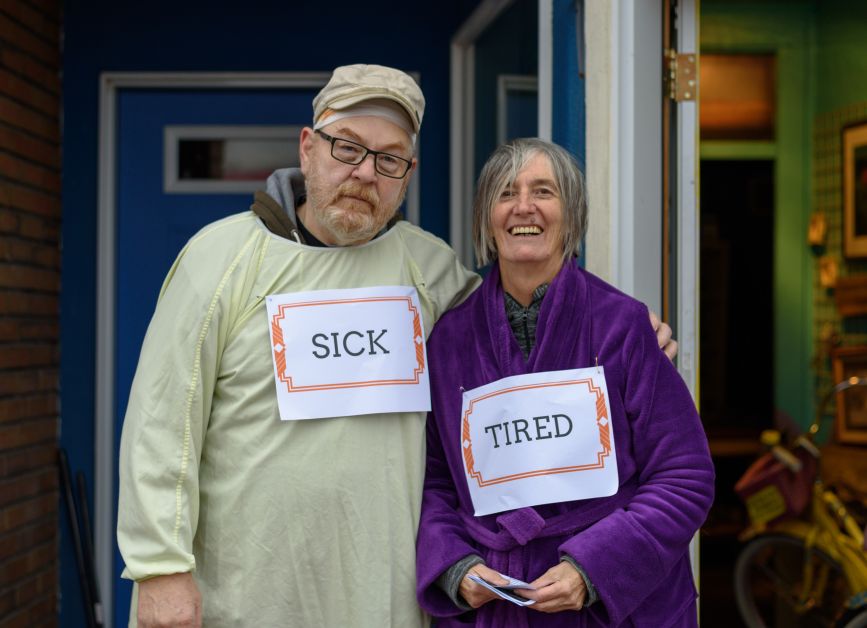 Mike and Carol Tudor dressed up as ‘Sick and Tired’. They stood outside Third Avenue Arts to hand out candy.