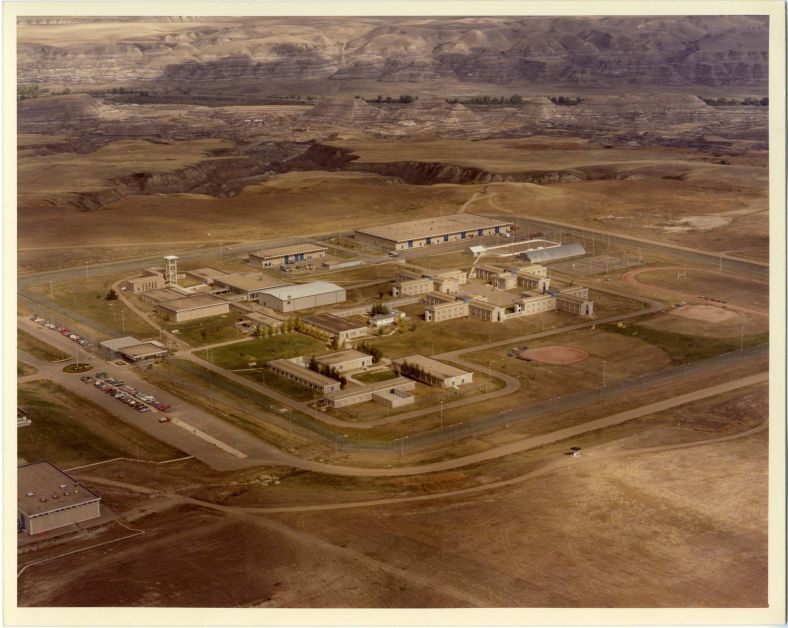 It came in 1967, and began a new chapter in the history of Drumheller. Today the Drumheller Institution remains an important part of the community.

The Drumheller Institution is celebrating its 50th anniversary. In those five decades, it has provided residents stable employment and has served the country in keeping communities safe and providing a chance for inmates to make a change.

It was the late 1950s and early 1960s, and with the exodus of the coal industry, Drumheller had fallen on hard times. Major assets such as the Royal Tyrrell Museum were not established and while oil and gas had been discovered in and around the valley, the industry was still in its infancy.

The Minister of Justice in 1959 initiated a departmental study to look at the future needs of corrections. In 1960, the report was submitted. This report showed that while Canada had sufficient facilities for maximum security housing and adequate minimum security work camp placements, close to 50 per cent of the prison population fell within the medium security classification. Due to the growth, the government planned to build four institutions, with one to be located in the Maritimes, one in Quebec, one in Ontario and one in Western Canada.

With institutions already in Saskatchewan and British Columbia, Alberta seemed like a fit for a new medium security institution.

Drumheller at the time was classified as a depressed area. The great coal machine that drove the economy for so many years was on its way out. Many families moved away with the industry, and the ones that stuck around were swimming in unemployment.

Chamber of Commerce members Joe Shearlaw and Francis Porter learned of the report and began to talk to then MP Charles Johnson. A committee of the Chamber was struck which included the two, and lawyer W.H. Sandercock. After Johnson was defeated in a general election, M.P. Eldon Woolliams was the new representative and he too championed Drumheller as the site. By then the committee was firmly entrenched in the lobbying effort.

The first concrete hint the institution was to be forever part of Drumheller was from Woolliams on March 7, 1962. On March 21, the federal Department of Justice confirmed Woolliams’ news. The institution would accommodate 450 inmates, have a staff of 175 and an annual payroll of $1 million.

The Drumheller Mail reported on June 13, 1962, that the site of the Institution was purchased from local farmer Walter Klamski. Tenders for the project were released on January 1, 1965, and the Honourable Minister of Agriculture Harry Hays officially broke ground on the $6.5 million project in April.

In 1966, Pierre Justras was appointed the first warden for the Drumheller Institution, and Stan Scrutton was appointed deputy warden. In October of 1966, the first recruits to staff the institution were sworn in as peace officers.

The construction continued and residents were so excited, it was not uncommon to see a gaggle of onlookers at a viewpoint near the water tower watching the progress. The viewpoint was even included in Drumheller travel brochures.

The official opening of the Institution was on August 25, 1967. About 400 guests and dignitaries were invited to the opening, and toured the facility. They were not the first guests however. On August 16, 25 inmates from Prince Albert entered the Institution.

When the prison opened, a number of living units and buildings were still under construction. As they were completed, they were filled.

In the institution’s history, it has served in myriad capacities, providing employment for the community and labour for local businesses and organizations. The vocational shops have contributed its work to a number of causes inside the community and beyond. This has served the community, but also built the necessary skills for inmates to start anew after serving their time.

Recent successes include the inmate labour that helped to build the affordable housing units in Drumheller. This significantly cut the cost to this municipal project, while at the same time gainfully employed inmates and allowed them to work toward apprentice programs.

About five years ago, the government made a commitment that will ensure the impact of the institution will last for another generation. It announced a $25 million to expand the Medium Security Unit and Minimum Security Unit.

To mark the occasion they are holding a Freedom of the Town ceremony where past and present staff and the Institution’s Honour Guard will march to Town Hall on Saturday, September 9 at 10 a.m., and affix a plaque at Town Hall.

On Saturday evening they will be hosting a gala dinner at the Badlands Community Facility.