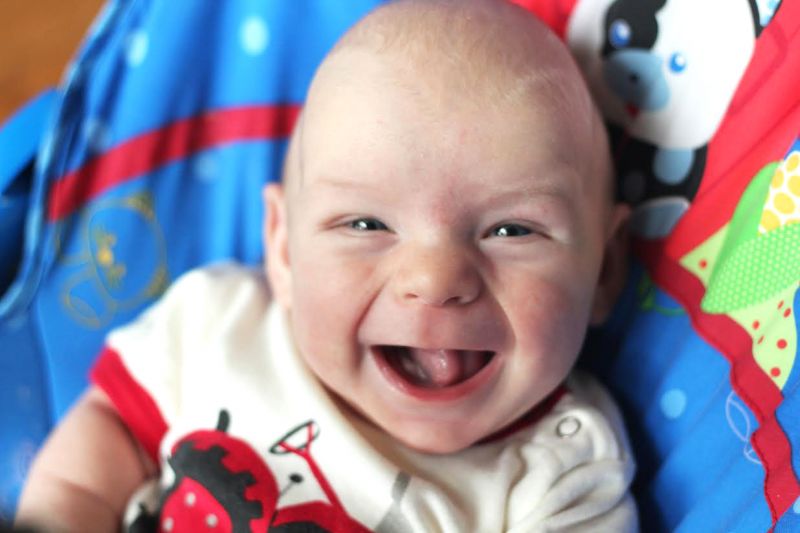 When Sarah Schultz gave birth to her third son Jonathan in April at the Drumheller Health Centre she thought she had given birth to another healthy boy.

But when she took Jonathan home to her family’s farm near Standard, she noticed the baby’s soft spot was closed and a bony ridge had developed on the back of the boy’s head. Schultz, a nurse herself, asked her physician and the nurses attending Jonathan about the abnormality but everyone said it was ok.

“As a nurse and a mom I knew something was wrong with his head.”

Jonathan’s forehead started pushing out and he had a very narrow and long head shape.

It wasn’t until two months later when Schultz was posting photos of Jonathan on her blog page that a reader contacted Schultz after she noticed something in the photos.

“She said she wasn’t sure if she should reach to me, but said she noticed pictures of Jonathan and he has a very distinctive head shape and her daughter was born like that, too,” Schultz said. “When she emailed me what she thought he had, it was within 10 seconds on Google that I thought ‘oh my goodness, that’s absolutely what our son has.’”

The doctor confirmed what the reader had noticed – Jonathan had craniosynostosis, a condition appearing in 1 of 2,000 newborns, where the plates of the skull fuse together prematurely, causing a misshapen head and restricting areas inside the skull where the brain can grow and develop. If left untreated it can cause developmental problems with the brain, leading to vision problems, migraines, and even impairment,  and an altered physical appearance for life.

Luckily, doctors were alerted when Jonathan was only two months old, allowing surgeons to perform a less invasive surgery than what would be required had Jonathan been four months or older. Twenty days later Schultz took Jonathan to the Stollery Children’s Hospital in Edmonton, where she used to work, to have the surgery performed. It involved doctors removing a thin piece of skull with discrete incisions.

“It was amazing to see how different he looked right after surgery,” she said. “If this wasn’t caught in a timely fashion we would have had to wait until he was six months old, and then there’s the waiting and worrying, and longer in the OR and in recovery.”

Just last week Jonathan began helmet therapy, which will have him in a special helmet for four months to help reshape his skull. He is developing normally, with one of the best smiles, and most kids with craniosynostosis end up developing absolutely normal.

“He’s doing awesome, actually… It was such a blessing. I’m very, very thankful to that woman,” Schultz said.

September is Craniofacial Awareness Month, and Schultz wanted to raise awareness of the rare disorder that affected her son, which was missed by all Jonathan’s physicians and nurses, but was fortunately fixed by the intervention of a stranger on the internet.

“Some of the key signs to look for are if the fontanelles (soft spots of a baby’s skull) are closed or if there’s a bony ridge like my son had. Kind of as they grow more they start to have a misshapen head because if any one of the sutures are closed, the brain only has certain spaces to grow,” she said.

Jonathan is wearing his helmet for 23 hours a day and is doing fine, and doctors expect a full recovery.