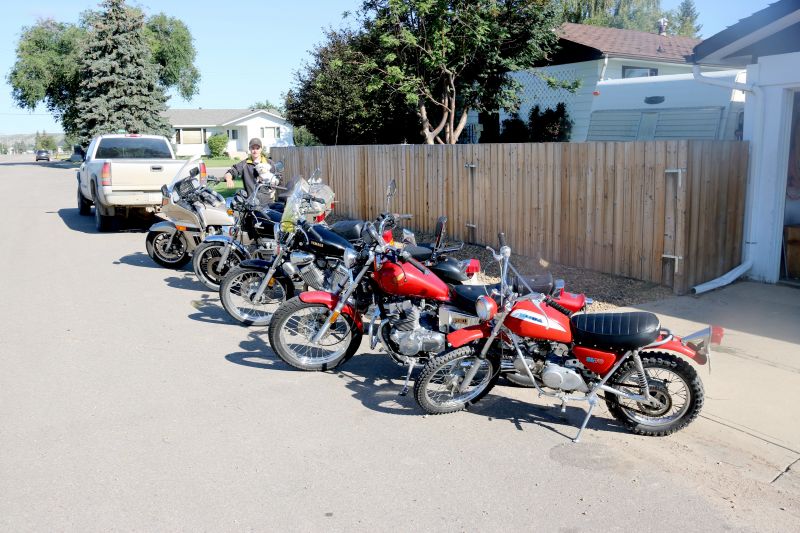 A family that tinkers together stays together. And eventually will hit the road together on a small collection of motorcycles.

The Mail caught up with 15-year-old Daniel Law in his garage tinkering with his 1971 Honda Trail bike. The bike was his great uncle’s and sat at his farm for years. He brought it home and undertook a restoration. He learned that this bike may have sparked the love of motorcycles in his family.

“This was the exact same bike my Dad learned to ride on, down in McGrath,” explains Daniel.

Today the family has five bikes ready to hit the road, and Daniel has one more, partially in a box in the garage and partially in his bedroom.

Growing up, there was always a bike around the home. His father has a Kawasaki Voyager touring bike and the kids all took their turn riding around with father Brian and mother Cindy. In fact, as his older sister Sarah and brother Devin came of age, they all began riding.

It is one thing to have a bunch of cool bikes, it’s another to keep them roadworthy, and that’s where the tinkering comes in.

His father, always handy, has restored an antique 1924 International Farm truck and Daniel explains that a Princess Auto industrial motor became the basis of a project. Working from a template they also built a go kart from scratch.

A few years after they moved to the valley, he acquired the Honda trail bike he has restored. He has also busted his knuckles working on the rest of the family bikes.

“The newest bike we have is a 93. They are all old enough and  it takes a bit a work to keep them going, but we take good care of them the best we can,” he said.

“It’s a work in progress. I was going to restore it, but now I think I’ll just turn it into a dirt bike,” said Daniel.

Daniel tells The Mail, he turns 16 next  April and then he will be licensed to drive. He, along with his mother and father, are planning  a trip in the Kananaskis, where he will ride his Honda 650 touring bike. His little brother Ben, 11, will have the choice of three bikes to ride along with until he catches the spark.