Logan James to compete as outrider at Dinosaur Derby | DrumhellerMail 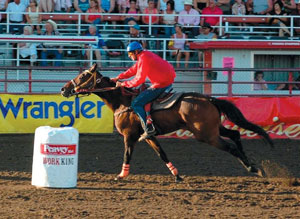 A Drumheller man is in for the ride of his life, and he is coming home to compete as an outrider in the 2008 Dinosaur Derby.
The WPCA Dodge Tour stop in Drumheller starts Friday, July 25. Among the outriders this year is Logan James, son of Tyler and Valerie James of Drumheller. The new outrider began his career at the sport last season, and this year he has been picked up as a regular for two drivers.
“It’s been going good, I’ve been getting a few rides, and keeping it clean,” said the young outrider in conversation with The Mail from the WPCA newest venue in Bonnyville. “This will be my first full year.”
So far this year he is on track. He just won his first race ever at Colonial Days in Lloydminster, outriding for Barry Hodgson.
James grew up around horses and was working riding horses for Colt Cosgrave for about four years. He jumped in the ring last year. While he is only 21, there are younger outriders on the track. Twenty year old Chad Fife has three seasons under his belt, and Chance Flad, who is approaching his 17th birthday this August, is in his rookie season.
The excitement is not just for young men; many compete into their later years.
“There are quite a few who have been there for 20 years and are still going strong, some only do it for a few years,” James said. “As long as you can get on the horse, you're good to go.”
While it looks like the teams are set, it is not that simple. According to James, the outriders scramble each race to be chosen by a driver to ride, and there is a definite pecking order. The outriders with the most seniority are usually picked up quickly with the younger riders competing to find a ride.
“The old guys are shooting for world championships, so they are taking up most of the rides,” he said.
James has two regular drivers; Stan Waddell and Cliff Cunningham. Because Waddell gave him his first chance riding in High River in 2007, Waddell gets first option. Mike Vigen and Brian Mayan have also picked up James.
James loves the excitement of rounding the half-mile track at top speed, but that’s not the only aspect.
“It’s quite a rush, it pretty exciting,” he said. “I like to race, I’m competitive, and I like to win.”
Stampede Week is already underway in Drumheller. Look for a pancake breakfast, a chili cook off and of course the Richard Cosgrave Memorial Pro Rodeo and Dinosaur Derby. Chucks start at 7 p.m. on Friday night. The rodeo begins Saturday at 2 p.m.