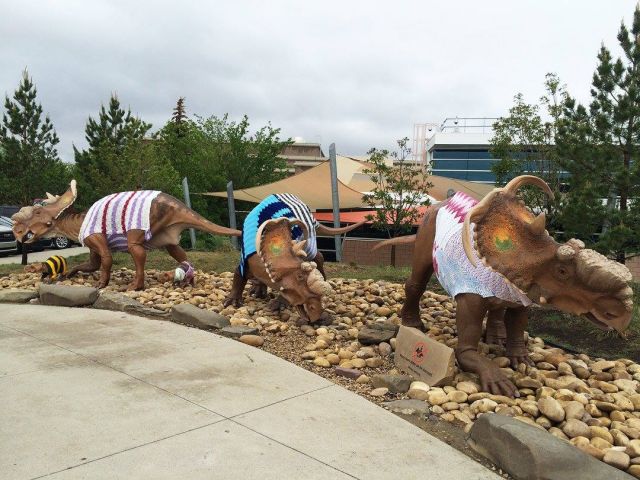 Drumheller’s dinosaurs have been wrapped up in a new art project that relates back to the Royal Tyrrell Museum.

Valley dinosaurs have been donning new attire gradually over the last month.

The attire has been knitted with love by “mystery knitters” all over town.

For weeks, locals have been puzzled about why the dinosaurs are being clothed and where it is all coming from. The secret is finally out.

The yarn bombing also  tied into the “unraveling the mystery of life on earth” marketing theme of the exhibit.

The graphics advertising this campaign used is a yarn design. A partnership between the Royal Tyrrell Museum and the community of Drumheller then conglomerated with the idea of “yarn bombing.”

The partnership was used to engage the community, the Drumheller DinoArts Association and The Royal Tyrrell Museum together.

Carrie-Ann Lunde, head of Marking and Public Relations says it was a calculated promotional  move.

The anonymous, mystery knitters were locals from all over town.

“There  was so many different people. It was all volunteer, anyone who had the skills was put to work,” says Lunde.

There has been some locals in town who have opposed to the knit clothes that the dinosaurs are donning.

The Mail reached out to a number of people who had expressed opposition to  the project on social media, but declined to go public.

“People are going to have their opinions. Art is always going to be controversial and up for different interpretation. At the end of the day it was a collaborative artistic project that we had a lot of fun at and it was a great thing to be able to do.”

All of the knitted clothes for the dinosaurs will be “de-bombed” later this week. The knit fabric will also be washed and given to someone in need.