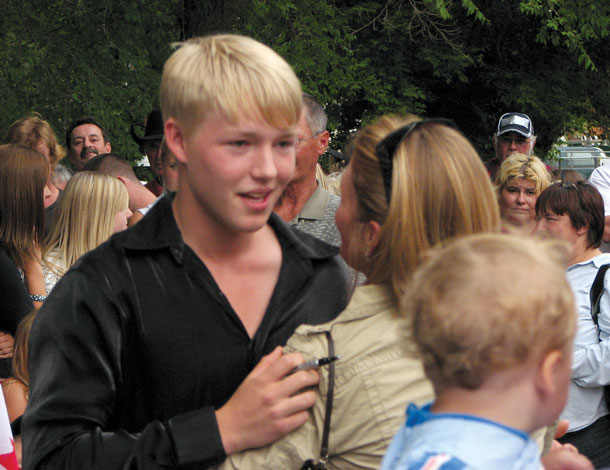 Jaydee Bixby has been singing about quality small town girls lately, and will be heading back to his hometown for Canada Day. He will be coming to Drumheller to play some shows and pre-release his new album, “Cowboys and Cadillacs.” Drumheller will be the first town to get a chance to purchase his album which will not be officially released until July 8. “He is so pumped to be coming back to Drumheller, and we were so excited to find out that HRM Records is going to pre-release his record first to Drumheller!” said Jaydee’s mom Shelley Bixby. Bixby and his new band, will be playing their first show on Monday, June 30, at Red’s Place starting at 10 p.m. At 5 p.m. there will be a three dollar burger patio barbecue with all proceeds going to the Morgan Jayne Project. Bixby will also be playing on Canada Day and will have his parents opening both nights.
On Canada Day, Jaydee’s parents will be playing from 8:00-9:15 p.m., followed by Jaydee and his new band from 9:30 to 11 p.m. The concert will be held at John Anderson Park. Bixby has been playing with his family since he was 11 years old and just released his first single, “Old Fashioned Girl.” The single is currently soaring, and was recently ranked at fourth on the ITunes top ten billboard. “You know how you watch the rap videos and all the MuchMusic videos and they have girls dancing around half-naked and younger kids see that and they think ‘well that’s what I’ve got to do to be cool and be like the people on TV’ (but) there’s nothing more attractive than a girl who dresses down and doesn’t let (everything) hang all out when she’s going out, a genuine old-fashioned girl who likes her hair up in ponytails or something,” Bixby told CTV in an interview on his album. "I always heard if you can find a woman like your mother, you’re good,” said Bixby in the interview. Bixby co-wrote two of the songs on his new album and was pleased he was able to make the kind of record that reflected who he is. “I really wanted the album to represent me. When you do a really fast job on it, people will notice. If you take time to work on it and nurture it ... I wouldn’t have let it go out unless I felt like this is how I want people to see me, this is how I want my career to start,” Bixby told CTV. To listen to a sample of his music you can go to his my space page at www.myspace.com/JaydeeBixby