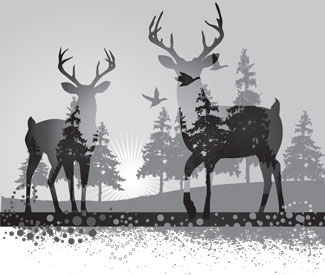 A mule deer caught in the Handhills has tested positive for chronic wasting disease.

The province has identified a mule deer caught in the Hand hills with Chronic Wasting Disease (CWD), the first deer in the area to be confirmed with the disease.
As former president of the Alberta Fish & Game Association, Drumheller’s Rod Dyck is all too familiar with the spread of CWD in Alberta wildlife, and said the Hand Hills deer is the first case to be found this far west.
He explains CWD is a prion, which is a small infectious particle composed of abnormally folded protein that attacks the brain of the animals and, causing progressive neurodegenerative conditions in the animals.
Mule deer bucks are most likely to test positive for CWD, and the disease is least likely to be found in female white tail deer, according to Alberta Environment and Sustainable Resource Development (ESRD). The animals can have the disease for four years and not show symptoms, but as soon as they show symptoms of CWD, they die within a few months.
Dyck said origins of the disease were traced to a U.S. government research facility in Colorado in 1967, and were sheep scrapies, a fatal, degenerative disease that affects the nervous systmes of sheep and goats, transferred to deer and mutated. From there it spread up into Canada, through game farms in Saskatchewan. “Our association has been opposed to game farms for this reason,” said Dyck.
He adds the University of Saskatchewan and the Univeristy of Michigan are both working on vaccines for CWD.
The first reported case of CWD in Alberta was 2005, and this past hunting season, 37 positives out of 1800 heads tested brings the total CWD cases in Alberta to 211.
All it takes is for a wild deer to touch noses with an infected deer in the game farm, Dyck explains, and it spreads from there. It’s taken hold in south-Eastern Alberta, and he said CWD is now considered endemic in Saskatchewan because the disease is found in 50 per cent of the wild deer population.
The disease is tracked through hunters submitting frozen deer heads to the province for testing.Dyck believes the province had a window in which to get a handle on the disease, but said that time has now passed. “We don’t know if anything else can carry the disease, such as a coyote.” No elk in the wild have tested positive for CWD at this point, said Dyck, but the first moose, killed on the highway near the South Saskatchewan River valley in 2012, is the first such case identified in Canada.
The CWD hasn’t been shown to spread to people, but ESRD recommends not using the meat of an animal that’s tested positive,and will destroy it for hunters that bring it in to them.
Dyck notes it’s already been a tough couple years for the area’s deer population, estimating at least a third of Drumheller area mule deer and white tail deer herds have perished because of the harsh winters that made it  unable for the deer to easily feed.