Facebook connects The Mail to part of its past | DrumhellerMail 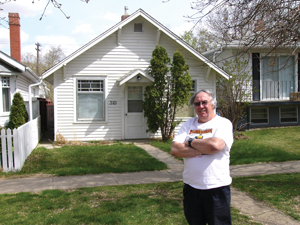 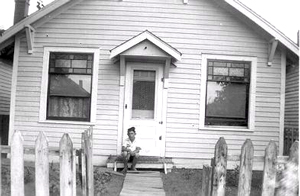 The Mail has been saluting its past with weekly stories about the people, events, ideas, and movements which shaped the history of the publication and the valley in which it has operated for 100 years.

Ideas for these articles have come from us, some from you, but this tidbit of history came in through our Facebook page when Al Girard shared his memory of hawking Drumheller Mails on the downtown corner during World War II.
Girard, 75, only lived in Drumheller for a few years, but was there during the war effort and there when the country took to the streets to celebrate V-E Day.
“When I was 9 or 10, I used to pick up handfuls of papers and sell them at the corner. After, I’d go to a Sunday matinee at the Napier Theatre,” Girard says, a retired CTV cameraman and former professional musician living in Edmonton.
“I came down with scarlet fever and the staff at the Drumheller Mail sent me a card to get better. I still have it.”
His father owned the Central Super Service British American gas and service station and had agency to sell Willys Jeeps.
Girard tells of story which was also picked up by The Mail, where him and three friends got word a nearby farmer bought three war surplus Avro Anson twin-engine bombers. He let them climb into the cockpit, but their weight tipped it over as the tail assembly had been removed. “It was a column inch article saying ‘Boys will be boys’. I’ve still got it.”
He said during a spring melt one year, the Calgary newspapers and Canada Post had to push mail sacks out of a small plane because the roads were impassable. There was no place to land, so they’d make low passes over a field on the outskirts of town for at least a week.
You don’t see that kind of service from Canada Post these days. At least not this week.
Girard says Halloween was a big deal for kids during his time here. Although the ‘trick’ part of Trick or Treat is rarely ever delivered on October 31, it was a big deal to the rural kids then, he says. The older kids went to the movies and the younger kids trick or treated. He took a bicycle wrench, and when the older kids were nestled into the seats with their popcorn and sodas in hand, he switched the handlebars and seats on their bikes parked outside. “They had to steer with the seat and sit on the handlebar home,” he laughs. “That tradition is gone, it was very rural, I think.”
Although only spending a few years in Drumheller, leaving after Grade 7, he still makes the sporadic trip to the valley. He visited last summer to snap photos of the Hoodoos before they were fenced in, and expresses dissapointment in the vandalism which has caused the catwalks to be put in place.
“I just enjoy the area, it is so unique. I enjoy going down and looking at the scenery and remembering the way it was.”