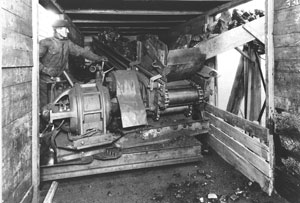 There is something under the ground.

The history of Drumheller has been defined by what lies  beneath the soil that we walk on. From dinosaurs, to the coal boom, to present day and the extensive exploration and extraction of oil and natural gas. While palaeontology may have defined much of the image of the valley, energy has defined the economy of the area. At times the two have crossed over.
One of the first to look beneath the surface in Alberta was George Dawson, the first director of the Geological Society of Canada, and namesake of Dawson City and Dawson Creek. He is credited with extensive research into coal deposits and dinosaur fossils. One of his early field assistants happened to be a man named Joseph Tyrrell. These pioneers in the geological field often pointed out what would become obvious to the original settlers of the area.
According to a history compiled for the Hills of Home by Myrtle Toshach and Bill Murphy, early settlers dug coal out of the hills. When the likes of Sam Drumheller and Jesse Gouge appeared on the scene, they  recognized the economic potential of the coal and  took out the first leases in the valley.
Drumheller coal provided the power for industry and private use. It also helped Canada weather two world wars. The industry also drove the growth of the town, and in 1930 Drumheller was incorporated as a city.
Many see the Leduc discovery as signalling in of a new age in energy production and eventually conventional coal mining ended in Drumheller.
Around the same time as Leduc, The Daily Oil Bulletin reported that Gulf Research and Exploration, a division of Gulf Oil was to expand its operation in Alberta in what it described as one of the “hot spots” of exploration in 1947.
“This bolt starts in around 60 miles northeast of the City of Calgary, to the north of Drumheller and Hanna, and trends north and northwest for over 200 miles to the Whitecourt area, some 100 miles northwest of Edmonton City.”
Oil was discovered in the Drumheller area in 1950.
A group of residents pooled their resources and secured drilling rights. The area had been  surveyed by Great Plains Development Company, with the verdict that there was no deposits. This didn’t deter the group. Instead of science, they used what was dubbed am “electric divining rod” and picked their spots to drill.
The first site they picked to drill on was called Mazel No. 1, Mazel meaning luck in Hebrew. The well was located about six miles north and east of Drumheller. They were drilling late into the summer of 1952. On September 3, they broke through. The well blew 200 feet in the air.
The Drumheller Mail reported: “A production test on the Mazel Drumheller Oil Well No. 1, which blew on Sunday, will be made by the end of the week, the Mail was informed this morning. Casing it was learned, was being moved to the site as quickly as possible.
A special electronic device (Philip’s divining rod), it was learned was used in locating the site for the well.
“When the Mazel Drumheller No. 1  well, near this city blew in lustily early Sunday morning scattering oil over a wide area, officials here believe that the “strike” could be heralded as a new field. Production as the well came in was rated at 3,000 to 5,000 barrels per day.”
The importance of the discovery was discussed on the editorial page.
“The recent oil discovery near this city has substantially boosted the importance of the area in the eyes of the rest of Canada and laid the foundation for greater achievement throughout the years.”
“Major part of this credit for the latest stride in our advance to greater commercial importance is due to the district boosters of the well. Each quietly played a pioneering part now written into our history.”
The original well cost $112,000 to drill and was at the 5,571 foot level when it blew.
The syndicate made a deal with New Superior Oils to drill the remaining 12 wells on the section. All 12 struck oil.
More wells were drilled, and by the end of 1953, about 6,000 barrels of oil a day were being pumped.
Another group called The Stockton Syndicate drilled two successful wells, and by 1954, oil was being used for heating in Drumheller.
At that time there were no pipelines in place, so oil had to be trucked to Calgary. As production increased, a tank car terminal was established in Munson. Soon after however a pipeline was completed to Big Valley and Stettler to transport oil to market.