80 years of swimming, thanks to service clubs | DrumhellerMail 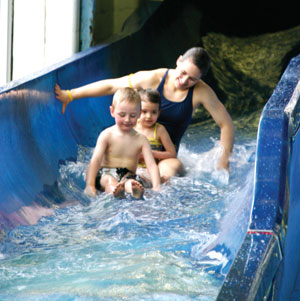 Drumheller is known for its summer. The long hot days with the sun beating down off the hills of sand and bentonite the walls of the valley holding the heat in … it makes you want to just jump in the pool.

Thanks to community groups, Drumheller has been able to swim in comfort. In fact, Drumheller was one of the first communities to even have a swimming pool, and that was thanks to the Drumheller Rotary Club.
There were a number of service clubs and organizations in the valley in the early days of Drumheller. Some, such as the Rotary, Lions, Elks and Kinsmen have endured, while the Fraternal Order of the Eagles and the Independent Order of Odd Fellows no longer have a presence. While Rotary came to Canada in 1910, and became an international organization in 1912, it was not until May of 1924 that there was a club in the Valley. The list of founding charter members reads like a who’s who of early Drumheller including names such as town founder Thomas Greentree, Drumheller Mail publisher Grover Cleveland Duncan and notable merchants Nelson B. Vickers and Albert Toshach.
By 1928, they made one of the most lasting contributions to the community, and that was the swimming pool. Due to the loss of children’s lives in the Red Deer River, the Rotary Club undertook this project. This was the third outdoor pool in Alberta, only being trumped by Banff and Edmonton. At the time, it was a great expenditure, and cost $40,000 to complete.
This became the summer pastime of numerous children over the years, and a place to learn water safety and to relax. For a time the Rotarians operated the swimming pool, skating rink and athletic park all at once.
After 26 years, the City of Drumheller took over operation of the swimming pool. While there still is an outdoor pool in Drumheller, this pool was built by the City of Drumheller. The Rotary Club however built the wading pool that accompanied the new pool. The original pool is where the Aquaplex now stands.
In the early seventies, the community began to rally to   build the Aquaplex. This time another community organization spearheaded the effort. The Kinsmen Club of Drumheller took the reins of the project. As Sandy Cunningham, a member at the time, recalls, they were toying with the idea of adding lights to John Anderson Park or taking on the project of an indoor swimming pool for year-round recreation. He said that Joe Cardamone and Bob Foulon took the lead and enlisted the help of other service clubs.
“All the clubs came together like the Kinsmen Club, the Rotary Club, The Lions Club, the Knights of Columbus and the community itself. It really turned out well,” he told the Mail in a 2003 interview.
They took on the task of fundraising. Cunningham said economically the conditions were favourable, and they were able to get support from the rural community for the project. They held a number of community fundraisers. One was famous for its spirit, when at the Rotary Radio Auction items such as a stick of gum and a bag of chips fetched top dollar.
Another legendary effort is when the Kinsmen thought they could build and raffle a house. The bank didn’t exactly see eye-to eye, until 10 members each signed a personal guarantee to be on the hook for $10,000 until enough tickets were sold to pay back the bank.
On December 6, 1975, the Aquaplex officially opened, and since then, it has become a hub for youngsters to let off steam, adults to get some exercise and a great place for children to learn how to swim.
In 2003, it underwent a major renovation. While the original tab for the original pool was $40,000, to re-side and retrofit the facility for energy efficiency totalled $400,000.
The clubs continued their support and in 2005 the Rotary Club led an effort  to purchase a bulkhead, allowing the Aquadinnies Swim Club to train and host swim meets.
While community service groups have been there in the past, they continue to have a presence in their support of major projects. While the community is on the cusp of realizing a new community facility, there is no question that service clubs have, and will continue to drive this project.