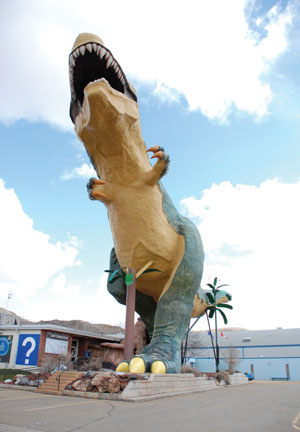 In 2000 the skyline of Drumheller  was changed in a significant way, some would say in dinoriffic proportions.

On October 13, 2000, the World’s Largest Dinosaur celebrated its grand opening. This was about one year after ground was broken on the project and after passionate debate on the whether the project should even go ahead.
Flash forward almost 11 years, and the debate has cooled, the community by and large has warmed up to the 82 foot Tyrannosaur. Since 2005 it has given almost a half million dollars back to the community, not to mention caused thousands of visitors to stop, take a picture and explore more of Drumheller, providing an even greater economic impact.
The World’s Largest Dinosaur has contributed in the last 10 years to cementing Drumheller’s reputation as the Dinosaur Capital of the World.
Bink Losoncy was president of the Drumheller and District Chamber of Commerce during what was called the DINO 2000 project. The chamber was facing a possible drop in revenues as the Government of Alberta was taking over the book store at the Royal Tyrrell Museum. He said then Chamber manager Cory Campbell was instrumental in getting the project rolling.
“He essentially got the idea started and sold me and the board on it,” said Losoncy. “He thought this would be a good thing for the valley.”
Campbell said the idea of a giant dinosaur had been bandied about in the valley for years, and the main goal was to capitalize on the traffic the Royal Tyrrell Museum attracted and bring them into Drumheller. He also felt it needed to be more than a statue, and the idea of having the stair inside the dinosaur came to life.
He said there was opportunity as the federal government had introduced the Millennium Grants.  There was also Community Facility Enhancement Project money available from the province, and rather than seeing the funds go to other communities’ projects, he felt it was a good time to take advantage of the programs.
The DINO 2000 project was able to secure a Millennium Grant for $250,000, as well as a CFIP grant for $150,000. They also had to dip into chamber funds as well as funds from the Business Development Centre to complete the project.  Campbell said the Investment Review Committee of the chamber was a great support to the project. Hussar Credit Union also financed the project.
As with most projects funding became a hot button issue.
“There were some people that weren’t very supportive of the idea and let us know in terms,” said Losoncy. “Some of the letters we got said it was more important to use tax payers money to fill the potholes in the town than to build a dinosaur.”
Campbell said it took a lot of convincing, but he was sure that any vehicle travelling passed with an elementary school-aged child would stop. He laughs and says it is a renewable resource because there are always children entering Grade 4 and studying dinosaurs.
With a price tag of about $1,000,000 Campbell said it was a steal. Designers told him for that price it would be a feat, and for what it has brought to the community, a great value.
In the end, the chamber supported the project and beside the Drumheller Aquaplex stands the 82-foot high dinosaur, weighing in at 145,000 pounds. There are 106 stairs to the top of the dinosaur, which is roughly four times the height of a life sized Tyrannosaurus Rex. Amusement Leisure Worldwide was the main contractor that built the World’s Largest Dinosaur. Board members of the Chamber of Commerce during the project included Bink Losoncy, Alan Ross, Murray Martin, Terry Kuhl, Boyd Grieve, Vern Dickau, Larry Davidson, Sherry Carr, Ray LavaL, then Mayor Phil Bryant and Barry McLeod.
One aspect of the World’s Largest Dinosaur from the beginning was the plan that the attraction would give back to the community through its legacy.
“The idea was for something we could do as a chamber organization to raise funds for the community yet also be an attraction,” said Losoncy.
In 2005 after all expenses from building the dinosaur were cleared, the Dinosaur the Dinosaur Legacy Fund began to do just that. Since then, the fund has distributed $455,950 to community groups. This includes small grants such as $1,000 for curtains for Kaleidoscope Theatre to a $250,000 for the Badlands Community Facility.
Last fall the World Largest Dinosaur celebrated its 10th anniversary, and continues to bring the magic of dinosaurs to thousands of visitors.
“It has so far worked out the way we hoped,” said Losoncy.