Squeezes in the mines | DrumhellerMail 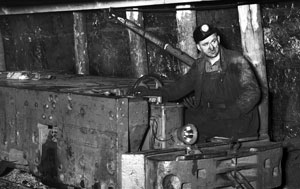 With the Miners Centennial celebrations just under two weeks away, many in the valley are looking back on the forces who created Drumheller – no, not the dinosaurs – the men who toiled in the earth and the unfavourable conditions they dealt with on a daily basis.

Eric Houghton was a motorman at the Atlas #3 mine from 1949 until it ceased operations in 1954, and in his time there during his 20’s, he experienced what the mine workers called “a squeeze”.
A light rain of dust and rock on their shoulders and the twitching of the ponies ears warned of the upcoming squeeze, where the floor of the mine would push upwards – sometimes as much as five feet over a period of time.
“It was like a miniature earthquake, from the core of the earth squeezing outwards,” says Houghton, now 85.
He said squeezes weren’t as loud as one would think, the timbers would creak and they’d feel the bits of rock falling.
“You’d turn off your machine and stop to listen, and as you did you would hear the rocks separating and soon there would be a big thud of a rock falling.”
Houghton said the cart ponies would be the first to know a squeeze was happening or even hear a runaway cart barreling down the track. When the ponies took shelter on the sides of the mineshafts, the men followed suit.
“This was a common occurrence in Drumheller because of our soft rock and coal. It reminded me how what a different world they lived in,” says Linda Digby of the Atlas Coal Mine.
Digby explained that contrary to initial thought, when a mine is excavated there is not only pressure from the top of the shaft, but from the bottom as well. Sometimes a squeeze might happen over the period of months and other times in a matter of hours.
Married men were not allowed to enter an opening going through a squeeze, so Houghton, single at the time, volunteered to remove equipment from the mine. They worked for 30 hours straight before the pit boss ordered them to stop due to safety.
“He said ‘It was hot, maybe because we were working so hard.’ In some cases, the timbers would shriek as they squeeze, and rocks would be falling,” says Digby.
Ultimately, the roof came down and closed up that section of the mine permanently.
“Once the roof falls down in these unprotected sections, it stabilizes the rest of the mine. They’re happy when it comes down,” said Digby.
Despite the threat of falling rocks, runaway carts, and getting caught in a squeeze, Houghton said he enjoyed his time at the Atlas #3 mine more than any other job he’s had.
“It was a good feeling to know you were keeping people warm.”
As organizers plan the May Day celebrations on May 1, including a procession through the downtown, Houghton hopes he will attend –what he calls – a long overdue event.
“It’s sure nice to know they’ve finally realized the miners made Drumheller, not the Dinosaurs, because Tyrrell was looking for coal seams when he found many dinosaur skeletons.”