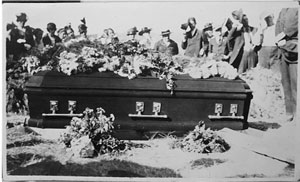 “Even as a man was dying, another was waiting to occupy his bed. A man often died alone, among strangers who could not understand him even when he was only begging for water. Terror of the Black Death kept family or friends from visiting him. Some victims never got to our hospital; they had been abandoned to die in a dugout or shack,” wrote nurse Gerrude Charters, a volunteer who dared to enter the quarantined Drumheller during the Spanish Influenza outbreak of 1918.

Of the 2,000 residents of the valley during the early days, estimates say up to 200 died in the deadliest disease outbreak since Europe’s Black Plague.
In the Drumheller Municipal Cemetery, there is a mass grave with over 100 bodies buried.
There were so many ill and dying they turned the basements of local business’ and schools into temporary mortuaries.
Charters, the nurse who published her story in the Drumheller history book Hills of Home, wrote, “Cocky little Jerry almost made it – then lost his fight for life. When one young Italian miner died, his brother in the next bed turned toward the wall and stubbornly refused all help. He died the next day. These European miners believed the Spanish Influenza was the Black Death.”
Most victims were healthy young adults, in contrast to most influenza outbreaks which predominantly affect juvenile, elderly, or weakened patients. It is suggested between 50 million to 100 million people died because of the Spanish flu. Some 500 million were infected.
As the Great War ended, soldiers returning brought back the Spanish flu, spreading it across Canada where few had resistance to it.
“Drumheller was hit worse than others, partly because the living conditions were terrible. This was an era where Drumheller was called Hell’s Hole because the living conditions were so terrible. Primitive shacks, latrines which were never cleaned and latrines which were too close to the water supply,” says the Atlas Coal Mine’s Linda Digby. “This was when the population explosion had just happened and the infrastructure just wasn’t there.”
The Drumheller Hospital wasn’t built until 1919, with the flu outbreak tapering off around that time.
Another aspect of the severity of the Drumheller outbreak was the large numbers of immigrant workers: single men who knew little English and few people to look after them. Many died in their shacks.
“I had just arrived in the Valley when the Flu hit. Like a lot of others I got it. I was taken to Drumheller and put in the basement, along with eleven others, in the old People’s Bakery. Out of the eleven, only three of us managed to come out of that basement and to go on and finish our many years in the mines,” said coal miner John Cameron in 1972, in notes provided by the Atlas Coal Mine.
Charters wrote that the worst of the outbreak in Drumheller was through by November, shortly after World War I was declared won.
But a token of the many lives lost in the valley is left at the marked, mass grave in the Drumheller cemetery.