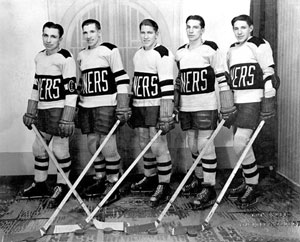 At one time, the Bentley family was regarded as the greatest hockey family in western Canada.

The family of thirteen children spawned five brothers who played for the legendary Drumheller Miners, three of whom went on to have remarkable NHL careers in the 1940s.
Max, Doug, Roy, Reg, and Wyatt “Scoop” Bentley grew up in Deslisle, Saskatchewan with patriarch Bill, a professional speed skater in his day.  Living on the farm, Bill told his boys that milking the cows would give them strong wrists and a stronger shot. “My dad had eight cows on the farm back in Delisle ever since I can remember, and I’ve milked those cows two hours in the morning and two hours at night every day I’ve been on the farm. That’s a lot of milking, but it gives a guy strong wrists.”
All of the Bentley boys were small in stature, but it was said their father taught them the mantra, “If they can’t hit you, they can’t hurt you.” It was this philosophy that would later identify Max Bentley’s NHL career as a phenomenal puck handler.
In the ‘37-38 season, Max, Doug and Scoop joined the Drumheller Miners, with their brothers joining the team the following season. Their family purchased a service station in town, and Roy, Reg, and Doug ran it while all five brothers played for the Miners. Attracting widespread attention, the Miners finished second that season.
Doug was eyed by the Boston Bruins, and Max was locked up by the Montreal Canadiens. But Doug was later dropped and Max was turned away after the team physician said a heart condition would end any chance at an NHL career.
The coach of the Chicago Blackhawks, who finished last that season, was tipped off by a sportswriter about the prowess and speed of Doug Bentley, and when the 1939-40 season opened he was one of six rookies in the Hawks’ lineup.
At this point, Max was playing senior hockey for the Saskatoon Quakers. Doug suggested the Hawks team owner pick up Max, who wasn’t initially contacted because of his size and heart condition. But short on scorers, Chicago invited Max to a Chicago training camp in October of 1940. Sent to join the American Hockey League’s Providence Reds, Max scored the winning goal with 12 seconds remaining in his first game, and in November was summoned to the big leagues.
The war draft opened up opportunities for the Bentleys, and Reg was called up to Chicago on the same line to become a marketing bonanza for the club. But Reg didn’t make the cut and was dropped after playing in only 11 games.
On January 28, 1943, Max recorded his most productive game, scoring four times and assisting three more in a 10-1 win over the New York Rangers. That season, Doug Bentley went on to win the NHL scoring championship with 73 points, becoming the first Blackhawk to accomplish the feat.
Doug Bentley missed the entire 1944-45 season, when at the start of the season, the Hawks travelled to Canada to play an exhibition game. When crossing the border, Doug was denied permission to leave Canada and spent the entire year playing senior hockey for the Laura Beavers. He returned to the Hawks the following season.
After spending two years in the Canadian Armed Forces, Max returned for the 1945-46 season, joining Doug and Bill Mosienko to become the “Pony Line”, for their speed. That season, Max led the NHL in scoring, and was also voted to the NHL First All-Star team and received the Hart Trophy.
After another successful season, Max was shipped off to Toronto to lace up with the Maple Leafs. Captivating the Toronto audience, Max was quickly nicknamed the ‘dipsy-doodle dandy from Delisle’ for his stickhandling prowess. Toronto won the Stanley Cup that season. Max finished fifth in the league for scoring, but the Leafs were ecstatic about the scoring production they received from the trade.
Doug remained on the Blackhawks’ roster, replacing
“Mighty Max”, leading the league in assists while finishing third in the scoring race, proving he could excel without his brother.
Max and the Leafs went on to win three more Stanley Cups, excelling on the scoreboard until 1953 when the New York Rangers united the brothers. Doug lasted just 20 games, while Max played in 54, and both brothers concluded their NHL careers that season by returning to the WHL in Saskatoon.
Max Bentley was inducted into the Hockey Hall of Fame in 1966.
Doug Bentley never did have his name inscribed on the Stanley Cup, but was inducted into the Hockey Hall of Fame in 1963.