Brothels in the Badlands | DrumhellerMail 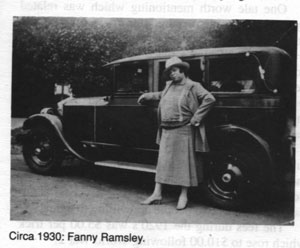 Overlooked and buried by the many tales of miners, pioneers, and dinosaur bone-beds of Drumheller are the houses of ill repute which were arguably as significant in the development of the valley as any mine or bone find.

There was a popular saying among golfer’s in the valley’s early days – after the 18th hole they’d play the 19th at Fanny’s.
“It is no wonder these establishments lured almost every man in the valley. Often stuck in cramped and stinking company houses, these men welcomed the idea of spending the evening in the company of a lady,” says the Atlas Coal Mine’s Linda Digby.
Mary Roper and Fanny Ramsley both owned brothels in Drumheller during the coal boom of the late 1910’s and after World War II. Mary’s house was on what’s now empty grassland across from Riverside Packers, and Fanny’s business was tucked in the hills behind the Drumheller cemetery.
Although they had many rivals in the business, it was these two who had the largest impact on the community. Along with Fanny’s and Mary’s, there were two areas in town that were known by their name and reputation to brothel goers, “the Western Front” (Newcastle)” and the “Blue light District.”  Several smaller houses, like the Hot Tamale House, and independent operators like Kalsomine Kate and Pretty Alice operated too.
With around 6,000 miners in the valley and women being scarce, the brothels would fill with labourers, pillars of the church, local politicians and mayors to become a civic centre of sorts. Playing cards, drinking whiskey, eating Mary’s southern friend chicken, and maybe some “chicken delight” afterwards, as some of the young miners are said to have called it.
“I’d drink whiskey at Mary’s,”  told a 70-plus miner who wished to keep his name anonymous. “No ‘chicken delight’ for me... I looked and some of the chickens weren’t so delightful.”
“I’d got to be pretty good friends with old Mary and she’d draw back the curtain to show me who was in the waiting room, if it was one of the pillars of the church or city council.”
Tricks are said to have been $5 with clothes on, $10 without.
Both Fanny and Mary had good reputations in town, as well as their girls, who were inspected by a doctor once a week. During the depression of the 1930’s, both of these generous madams would hire a taxi, have it loaded with food, and delivered to some destitute family. Most of the time, Mary’s and Fanny’s names would often show higher donations than many mine operators for worthy causes.
The RCMP would raid the brothels once or twice a year, if complaints were made. Fanny paid a small fine of $50.00 on December 9, 1930.  Although appearing in court, no judge would ever convict them – if he did he would never be welcomed there again.
“They did a service to this community,” the source said, “I don’t think the town’s fathers would have been happy if they were closed down.”
“After they finally closed down, we started having guys stealing panties off clotheslines...”
“With the number of single men around, I’d say it was damn well needed. There probably would’ve been bad stuff happening if they didn’t service these guys,” he says.
Both madams died destitute.
After World War II, the mining industry began to decline in production. With most of the coal mines closing down, many miners left the valley for job opportunities elsewhere. As a result, both Mary’s and Fanny’s places suffered from lack of business, and on top of this many of the girls were leaving the valley as well. In time, both houses closed down and were finally demolished for non payment of taxes.
Mary was buried in an unmarked grave in the Drumheller cemetery, in 1957, at the age of 75. Fanny died on May 20, 1949, at the age of 65. Her funeral is said to be one of the most well attended in Drumheller.