Flood of 1948 as covered in The Mail | DrumhellerMail 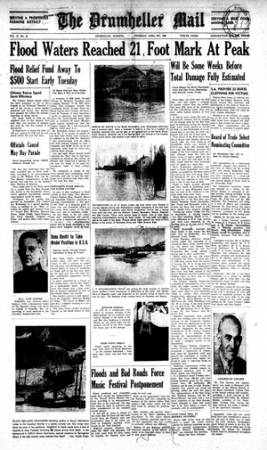 “Flood Waters Reached 21 Foot Mark At Peak” was the headline The Drumheller Mail ran with on its Thursday April 29, 1948 edition cover.

As quoted in The Mail, during the flood of April 21, 1948, “the Red Deer River had staged a rampage in greater volume that any exhibition since 1915.”
In fact by the time the paper came out a week later many residents were still only “within boating distance of their homes.”
The initial shock waves were felt at Wayne shortly after the river break-up at 3:21 p.m. Sunday April 18. By Wednesday, it hit its peak. Wednesday afternoon residents in North Drumheller were surrounded by floodwaters.
The Mail began reporting the flood in its April 22 edition when only initial reports were coming in before press time of residents moving to higher ground as the Red Deer River and its tributaries begin to fill up. On the Tuesday morning, a Winter’s Ambulance made a ‘mercy trip’ through the floodwaters to Wayne to pick up 77-year-old John Diorinchuk. The trip took three hours in water that splashed grill high. The man was found in his bed surrounded by water and was suffering from shock, exposure and pneumonia.
While 1948 was a long time ago for many residents to remember, the flood of 2005 is still a recent memory for most. The spirit of community and helping each other out in tough times was evident in 2005, and in the pages of the Mail, that same spirit was evident in 1948.
The Mail reported that William S. Howland, president and managing director of the Red Deer Valley Coal Company communicated to his local office from Atlanta Georgia that he committed $500 to start the Drumheller Valley Disaster Fund for flood victims. He also requested that $1,000 be set up as an employee relief fund. The Mail also learned before deadline that residents of Munson had completed a canvass of the area for funds for emergency relief.
By the next edition the flood relief fund has risen to $4,000, and by the May 13 edition it had passed $7,000.
In another story, it was reported the Red Cross had given 625 mattresses, 600 blankets and 50 cases of milk. The Calgary Salvation Army had collected 23 boxes of clothes to be distributed to flood victims.
Local merchants also came to the forefront. A full-page ad in The Mail, taken out by Vet’s Electric, Columbia Dry Cleaners, Claire’s and Shoprite stores offered discounts to valley residents.
Appreciation to residents for acting in the spirit of community was also communicated through The Mail from then Mayor Russell Kidd.
“To enumerate each of the fine acts of assistance and help given by members of this city and district during the flooding of the Red Deer River makes one of our finest chapters in the history of this area. Each of the numerous acts of kindness were given freely and spontaneously, and each made the lot of the flood victims easier to bear.”
While the community showed resolve in helping residents deal with the great flood, The Mail reported one tragedy, and that was the death of Dorothea Jackson.
On April 21, CPR Superintendent F.E. Wootton decided the train bridge at East Coulee should be demolished to enable the water and ice to move more freely, and he arranged to have it blasted. The Jackson home was only 200 feet from the bridge, and the husband of Dorothea, Peter, witnessed the blast and his wife being struck by a piece of lumber. She died on April 23.
The flood of 1948 was not the first or the last time water spilled the banks of the Red Deer River into the community, but it has gone down in local history as the one that all others are compared.