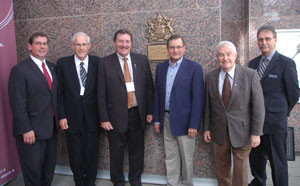 Drumheller has many things that make it special, the friendly faces, the unique scenery, and the rich mining history.

There is no question that dinosaurs are what make the valley famous. From early surveys, to amateur exploration, Prehistoric Park and of course the World’s Largest Dinosaur.
Nothing embodies the prehistoric world more than The Royal Tyrrell Museum.
In 2010, the Royal Tyrrell Museum celebrated 25 years, a blip in the timeline that the museum celebrates. However, in that short time, nothing has put the community on the world map more the Royal Tyrrell.
The museum is a natural fit, and it came together only with community support, government support and years of hard work.
The initial impetus came from Drumheller community leaders including Bill Doyle, Bill Doucette and Ossie Sheddy looking for something to help secure the future of the community. It was in 1978, and it was a brainstorming session after a council meeting. Their plan was to pitch the idea to then Premier Peter Lougheed, of a $5 million museum, a higher education facility and more industry for the valley.
Within the next three years, the Big Country Education Consortium was unveiled, as was the Tyrrell.
As reported in The Drumheller Mail commemorative issue for the Royal Tyrrell Museum opening in 1985, Doyle chuckled, “of the three things we asked for, we got two, and as they say, two out of three ain’t bad!”
Upon the museum’s opening, Doyle said “it’s the greatest thing for Drumheller since they discovered Coal.”
Doucette went one step further, “It’ll be the best thing ever for Drumheller.”
To go from idea to world class museum took some time, a lot of work, patience and pure fortitude.  Deputy Minister Historical Resources Division of Alberta Culture Bill Byrne became instrumental in getting the project rolling. Soon, a small budget was set, and it grew. David Baird took the lead as the first director, and showed determination in making the vision becomes a reality. In fact as he told The Mail in 1985, his only regret was there was no computer installed at the museum.
Soon like Santa’s elves, technicians, scientists, artisans and tradesmen were toiling away creating what would become the museum. In October of 1983, earthmovers came on to the site to start the build, and September 25, 1985, Premier Lougheed officially opened the museum. First day attendance was more than 20,000.
Since then bold predictions of 400,000 visitors a year were not off the mark, as a quarter century later the museum welcomed its 10 millionth visitor.
The museum gained notoriety throughout the province and the world both for its science and exhibitions. In fact, the staff and scientists at the museum branched out and have worked all over the globe forwarding their research and sharing their expertise.
Fast-forward 25 years, Lougheed returned to the Tyrrell to commemorate the anniversary of the museum, and join in the celebrations.
25 years ago Lougheed said of Doyle, Doucette and Sheddy’s idea, “it looked so good, I just couldn’t refuse it.”
On the 25th anniversary, Lougheed’s opinion had not changed.
“It was one of those things that just happened, as soon as it came it was just right, absolutely right,” said Lougheed of the idea of the Tyrrell. “Community involvement was absolutely key with me when I was premier, as it is today, and to see the community to be so involved and come up with the idea…it seemed completely right.”