One of the biggest disasters to befall Drumheller during its 100 year history has been the flooding of the Red Deer River.
Many residents remember the flood of 2005, which submerged large swathes of town and resulted in the evacuation of many homes. However, that was not the first time the Red Deer River swelled beyond its banks.
In the spring of 1948 the river rose and engulfed much of Drumheller. Many residents evacuated, while many others stubbornly refused to leave. Among those who remained in Drumheller was a newcomer to town.
“I had just moved here in December 1947. My parents had moved here a little earlier, but I wanted to finish my term at school,” said Dorothy Bergos, a long time resident of Drumheller who was only 14 at the time.
Bergos left Calgary to move to Drumheller with her parents, who had already taken up residence after her dad purchased a local sign shop. The move was hard on Bergos and made harder when the flooding began a scant few months later.

Dorothy Bergos’ house (foreground) was among those completely flooded in 1948. Bergos’ bicycle was tied up on a tree behind the house and all her belongings were destroyed.


“We were living in the cabin and I was going to school. The first thing I can remember is there was talk about the river being high and people wondering if it would spill over the banks,” said Bergos.
Bergos’ father was the head of the emergency measures organization and helped prepare the town should the worst occur. He did his best to protect his family as well. However, no one suspected how much the river would rise.
“He misfired on that one. He made us put all our furniture up on blocks and tied my bicycle up in a tree. Curiosity got the better of him, he opened a door or window in the cabin and everything fell over. We lost every single thing we had. Our bedding, clothing, furniture, everything was ruined,” said Bergos.
“It started to rain, which added to everyone’s grief. I was sent to live with some elderly friends and my parents stayed somewhere else. Thank God for friends.” 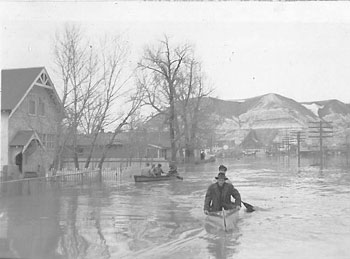 In a scene that would be more apt in Venice, John Anderson travels by canoe through the streets of Drumheller.


Those affected by the flood were given an odd gift.
“The Salvation Army, bless their hearts, decided to give everyone mattresses in North Drumheller. We didn’t have anywhere to live, let alone beds,” said Bergos.
“Some people with imagination decided to put the mattresses on top of their houses. I’ll never forget John Gray, who lived in the first house over the bridge, sitting on top of his house for three days with that mattress and it rained the whole time. None of us ever used our mattresses.  It was sad but funny at the same time.”
For a young teenage girl, new to Drumheller, the flood was even more devastating.
“I lost everything I owned. I had a record player, which was the most important thing I had. My dad tried to fix it, but it never worked. You have no idea the amount of silt that settled in our house after the flood. You couldn’t ever get it out,” said Bergos.
Eventually, they resettled on 3rd Street East, a much safer location should the river rise again, which it did four years later. This time, however, the waters stop short of their house. 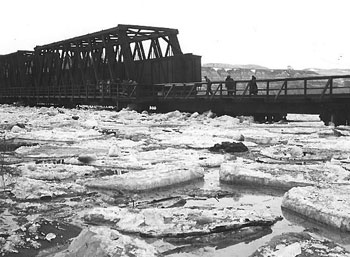 To ensure it wouldn’t be washed away, boxcars were placed on the Midland train bridge. The bridge survived, but many homes were devastated.