Memories of heroism live on in the Drumheller Valley | DrumhellerMail 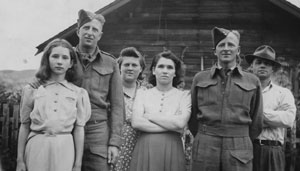 The first half of the 20th century was rocked by two of the deadliest wars ever to have been fought.
On July 28, 1914, the major powers in Europe and the world were drawn in to The Great War, later known as World War I. The catalyst for the war was the assassination of Archduke Ferdinand of Austria, but imperialistic foreign policies and a complex network of treaties in Europe were the underlying causes.
World War II began on September 1, 1939, when Nazi Germany invaded Poland. Resentment of the Treaty of Versailles and intense nationalism in Germany led to the Second World War.
In both wars the United Kingdom swiftly declared war on Germany. Thus, Canada, a member of the British Commonwealth, was brought in to the massive conflicts.
Men from the Drumheller Valley, a still young community, bravely enlisted to go overseas.
The first volunteer in World War I was W. S. Cameron, who joined the Canadian Army Medical Corps in late 1914, and was drafted to the Eight Field Ambulance Unit in 1916.
Willard Sandercock, a prominent lawyer in Drumheller for 49 years enlisted. In August of 1915, he journeyed to France as a Staff Sergeant the Cavalry Ambulance, and later as a Lieutenant in the 9th Field Battery, 10th Brigade.
Lt. Sandercock returned home after being injured by a shell in October, 1918.  After the war, he enjoyed the camaraderie of fellow veterans and regaling anyone who would listen with tales from the war.
Many miners enlisted as well and, because of their mining experience, were given the role of sappers. “They knew how to dig and knew about explosives,” said Linda Digby, Director of the Atlas Coal Mine.
Sappers, otherwise known as combat engineers, have a wide variety of duties, but generally are known for being experts at demolishing enemy fortifications. In World War I, sappers had the hazardous job of digging a tunnel from their own trench to below the enemy, placing explosives, and detonating them.

In World War II, Drumheller once again rose to aid the Allies, both on the field and off. Once again many men wished to go overseas to fight against the aggression of the Axis powers.
“So many wanted to but weren’t allowed,” said Digby. “They were miners and that was considered important work.”
Coal was vital to the war effort and the mines in the valley were producing record tonnage of coal. Mines were hiring new miners as fast as they arrived in town. Miners were able to work all they wanted and make the money they had dreamed of when they first came to the valley.
Lorraine Patrick, son of Dr. Omar Patrick and owner of the Atlas Coal Mine at the time, was given the rank of Brigadier and was in Ottawa during the war as an advisor for industrial efficiency.
The Ladies Auxiliary to the Royal Canadian Legion was also active during World War II. The ladies would visit wounded veterans and send care packages containing hand knitted garments and various other items to soldiers.
Many of those who went overseas to fight in the wars were sadly never to return.
Alfred James Briggs fought in World War I. He survived the fighting and moved from England to Drumheller in 1919. Briggs worked as a fireboss until March 1940 when he decided to journey out to Montreal and enlist in the Merchant Navy. A year later Briggs was lost at sea.
The heroism of all those who fought and continue to fight will live on in the hearts of the nation. On Remembrance Day, November 11, we pause to respect their noble sacrifice.