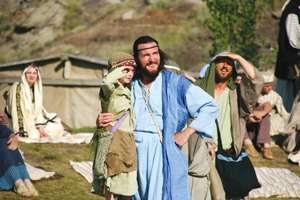 As the Canadian Badlands Passion Play celebrated its 100th performance last Friday, it’s time to look back on the events that led to the start of Drumheller’s greater attractions outside the world of coal and dinosaurs.

The Passion Play held its first performance in 1994, after years of hard work from a dedicated group of volunteers who finally laid the foundation for an idea that began circulating in the 1970’s.
LaVerne Erikson, who started the Rosebud School of the Arts and who was instrumental in the beginning of the Passion Play in 1990, says there was no doubt in his mind that the production would take off.
“I guess that’s why I did it,” Erikson says of the very beginning. “I saw so much potential.”
A lot has changed since the birth of the dramatic portrayal of Jesus’ portion of the Bible, but the new script and addition of three dimensional sound this year was the most significant change, says current Passion Play general manager Vance Neudorf.
“The change to a more play and musical view changed things around for us,” he says, after explaining the play hit a major attendance downturn in 2005. “After that, things began to spike – it put the Passion Play back on the map and in the right direction again.”
The big rush and enthusiasm of the early days went well, but the format became old for people who’d already seen it. Royal Sproule of Rosebud re-wrote the script, and attendance numbers began to climb.
“The success of it is not surprising. Right from the beginning, they wanted to do very good, credible art. I see the production values of the performance that the people of Drumheller don’t realize,” Neudorf says.
“Things are really rocking and rolling forward.”
The play’s site, nestled in the hills near the Drumheller ski hill, was part of the inspiration, says Erikson. Gordon Taylor, an influential politician and a recent Drumheller Mail ‘Drumheller Hero’, proposed the idea 20 years before the original board due to the Israel-esque landscape.
“What I had available to me that he didn’t was the Rosebud School of the Arts. I had connections to make it happen,” Erikson says.
“It was just the right time to come about.”
The Royal Tyrrell Museum was the first big tourism venture in the area, but the Passion Play was really the first, apart from the Atlas Coal Mine, which allowed hundreds of local volunteers to participate in the industry, Erikson says.
Looking back in time, the Passion Play came just before a big expansion of Drumheller – fast food restaurants, hotels and bed and breakfasts. “People just starting thinking ‘we can do it’”, says Erikson.
“The Passion Play was the catalyst to inspire people to be thinkers and get out there to create their dreams.”
Looking back, the play had an impact on the culture, politics, and economy of Drumheller.
Forming a land deal where the amphitheatre now sits involved three municipalities: the Municipal District of Badlands, the City of Drumheller, and Kneehill County. Having these three governing bodies sit down at a table and hammer out a deal to develop the Passion Play contributed to the formation of the town, Erikson says.
Culturally, the Passion Play has made the Drumheller area known for having great theatre, along with Rosebud, and shortly after the play’s success work began on the Kaleidoscope Theatre.
The real blessing, says Erikson, is that the organization has made the transition from one generation to the next.
“Almost half who signed the charter have passed away, and people who were young and acting in it have now taken over and provided leadership. That’s been the real blessing, to see that the Passion Play will carry on for generations.”
As for the Passion Play’s future, Erikson says it has been clouded with issues regarding the ski hill.
“Once we get over the ski hill challenges, the sky’s the limit.”
If this is resolved, plans on expanding the performance are in the sight of the board.
Neudorf says they are considering extending the two weekend show into more performances, adding smaller performances all summer long. A new script is currently in its second reading, and will bring a surround sound system to enhance the experience.
“It’s going to keep moving, along with this idea of having more than just a play, but an actual attraction to have people come all year to see what it was like back in that time frame,” Neudorf says.