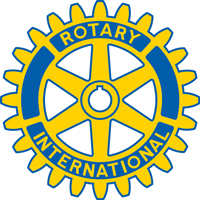 After 87 years, the Drumheller Rotary Club remains an active pillar of the community and still stands on the same foundation of which it was founded.

The year 1924 was a milestone year for Rotary International, which was initially founded in Chicago in 1905. Five new clubs were issued charters in 1924, including Camrose, Stettler, Drumheller, Banff, and Dauphin.
On May 20, 1924, the institutional meeting of the Rotary Club of Drumheller was held and Governor J.W. Davidson presented the club with their charter number, 1781. Inititial officers of the club were: President Dr. R.J. Johnston, Secretary J.W. Cummer, Treasurer John Eakin, and directors Alex Hanley, Dr. T.R. Ross, Rev. W.K. Thompson, E.A. Toshach, and N.B. Vickers – some still among family names in the valley today.
Since earning their charter, the Rotarians in the valley have a long list of highlights over the years, with new projects being started and completed continually. Their first major project was the opening of the Rotary Community Outdoor Swimming Pool in 1928. Lasting projects that still continue today include the first Rotary Radio Auction in 1962, the annual Citizen of the Year award had its first in 1970, the White Elephant Sale in 1978
“All of our focuses for the  time I’ve been here have been students,” says Debi Kennedy, currently past-president of the club and a member of eight years. “We have quite an active student program, like sending them to Ottawa, British Columbia, Wisconsin and hosting international students.”
The Rotary Club also focuses on seniors services: they recently completed work on a gazebo they funded for the Sunshine Lodge, they have been an annual sponsor of the Relay for Life, raising money for the Valley Bus Services.
Rotary International still holds the motto “Service Above Self”, and Kennedy believes today’s club still holds true to that notion.
“It’s not always with money, although that’s great. It’s about volunteering and helping your community,” she said.
There’s no doubt that the club has been a foundation of the community in the past, but the Rotary Club has struggled to find new, young faces to carry on the tradition.
“What we need is some young people in the community who have great ideas and a passion for helping others,” says Kennedy.
New faces don’t knock at Rotary’s door often, says Kennedy, as young people are too busy with commitments such as raising families to find time to volunteer.
“I do believe that younger people have to make their decision on where to make their volunteering, and I’m hoping Rotary is one of their choices.”
The club continues to work on initiatives in attracting new faces. “We need to get out there and promote Rotary, to the young ones, middle aged ones, and older ones to show them how valuable Rotary is.”