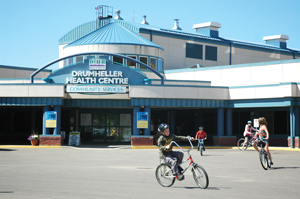 The Drumheller Health Centre held its grand opening on April 22, 2002, fulfilling the need for an upgraded and updated hospital for improved service and efficiency for not only residents of the valley, but the surrounding communities.

The Drumheller Mail ran a 24 page supplement to its April 17, 2002 issue celebrating the “New Beginnings” of the new health centre and revealing the new features of the building.
“When you look to move into a town, you look at the amenities it offers. The schools, the hospitals, are probably the key components for any community to survive,” says Jim Ramsbottom, who was CEO of Health Authority 5 from 1994 to 2000 and oversaw the first three quarters of the development of the new health centre.
“It was a well enough built facility,” says Ramsbottom of the previous hospital, built in 1979 and currently sitting empty on Riverside Drive in Drumheller, “but one of the major drawbacks was that emergency was on the second floor. It wasn’t practical in later years.”
Doctor Boris Nahornick, who worked at the Drumheller hospitals from 1957 until entering semi-retirement last fall, said having to take an elevator to the ambulance service was a poor plan for a hospital.
“It took quite a while to take people to the emergency department, and with this hospital it’s right there on the main floor to provide immediate help,” says Nahornick. Although a much greater facility, he says the Alberta government, under Premier Ralph Klein, reduced the number of chronic care, nursing home, and acute care beds in the 2002 Drumheller Health Centre from the previous 1979 facility.
“But the new building was and is much superior, it brought with it hemodialysis, a CAT scan machine, which is one of the better things to ever happen, a good physiotherapy department, cardiac rehab, and more,” says Nahornick.
The hospital board at the time didn’t feel it was worth upgrading the existing facility, and extended care and the auxiliary hospital and nursing home were getting older, so they sought a bigger complex on a bigger site.
“It took us a long time because of the politics involved. It was a tough battle – the hospital wasn’t that old so the bureaucrats in Edmonton didn’t even want to go there,” says Ramsbottom.
The Alberta government was looking to reduce funding of new facilities in rural areas and spend the money in urban areas such as Red Deer. But the board continued to push the Alberta government, three times in fact, to finally get the $40 million building approved in 1998. It was designed by Roman M. Kujath Architects.
“We worked our butts off to make sure we survived, and we made sure the number one capital project was a new facility for Drumheller,” says Ramsbottom.
Ramsbottom says the response to the opening of a new health centre was positive in town, although residents on the south side of the river were concerned they’d be blocked access if something were to happen on the Gordon Taylor Bridge.
“Other than that, the 28 acres we picked up was the only viable spot in the valley that wasn’t undermined,” says Ramsbottom. “We wanted to make sure we never ran out of space again.”