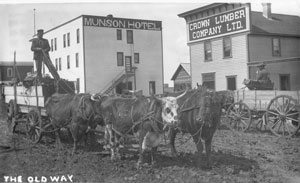 Munson has a long and proud history, and residents past and present will be celebrating its centennial next weekend.

Expectations were high for the little town that could when Fox Coulee was incorporated as Munson and the first Council meeting was held on July 18, 1911.  The area was originally settled by the farming community, taking advantage of the rich gumbo soil.
When the railway arrived, the community was on the verge of a boom.  Within the next couple years, The Munson Mail newspaper, (precursor to The Drumheller Mail) set up shop, the Munson Hotel opened, the RCMP were stationed in the community and businesses and residences were being erected  at a speedy pace.
Teams of oxen and horse were replaced by machinery and cars appeared in town. The council borrowed $1,000 to build sidewalks in the town and to the train station. In 1912, the fire hall and the jail were built.
Things looked like they were on the way up. By 1913, the CNR began to lay steel from Munson to Hanna, and the telephone came to the community that same year.
According to Alice Howard and Bessie Burfied who wrote the introduction to the Munson and Distinct history book, the fatal flaw to the town was water, and it stalled the development of the railway.
“A round house required water in abundance; a concentrated population requires water. Physical tests showed that this substance was missing. The round house went to Drumheller and with it the future of Munson.”
Drumheller, with the burgeoning coal industry did thrive, but Munson never really disappeared.
The community endured, and remained alive for many years through its organizations. The Munson’s Women’s Institute was strong as well as other community organizations, as were the schools. Institutions that built the community remained intact. In 1919 after the Great War, the community honoured its fallen with a Memorial Hall, and in 1925, the community was electrified.
The community remained an agricultural hub as at times four elevators operated for producers.
The community did see its fair share of struggles. The Spanish Flu had a considerable impact on the community as the village council asked all public places to close thier doors. The Club Café was rented to be used as a temporary hospital. Fire ravaged the town  on a number of occasions, and the weak water supply didn’t help matters.
While the community did not live up to expectations set out in the heady days, the community never really collapsed completely. Business did dwindle as trade passed the community on Highway 9. Oil and gas offered a shot in the arm for many in the area, but eventually the business community relocated. While the Royal Bank does still exist, it is in Heritage Park in Calgary.
While business disappeared, the people remained and that is the spirit of the community. This spirit will be on display at its centennial celebrations.
Registration for the weekend is on Friday, July 8 from 6 p.m. to 9 p.m. There is an opportunity for those with picture boards to come and set up their displays of items and artefacts they want to share with the community.
On Saturday morning, there will be a free breakfast from 9 a.m. to 10:30 a.m.  The parade starts at 11 a.m. Registration forms are on page 11  of The Drumheller Mail.
After the parade, there are all kinds of activities to keep participants entertained. There will be a show and shine car show as well as a firefighter competition. There will also be children’s activities throughout the afternoon.  At 4 p.m., there will be an adult slo-pitch game. There will be music throughout the day including Don Howard and Friends and Hoodoo Voodoo.
In the evening, there will be a roast beef dinner served and fireworks after dark.
On Sunday morning, the Munson Fire Department will be hosting a pancake breakfast.
“It’s going to be a really busy weekend,” laughs Becky Kowalchuk, one of the organizers.
She said those wanting more information on the celebration can see the Munson Centennial Facebook page or go to www.munsoncentennial.weebly.com.